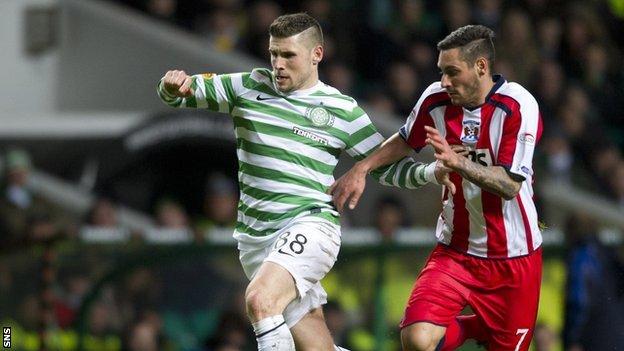 Kilmarnock assistant manager Jimmy Nicholl admitted that his side were lucky to escape Celtic Park with just a 4-1 defeat, despite some positive play.

Kille recovered from a first-half Joe Ledley strike to level through Cillian Sheridan, but three second-half goals from the home side secured the points.

"With the chances Celtic created, Neil will probably think it should have been seven or eight," said Nicholl.

"It would sound strange that we were quite happy."

Sheridan's goal shortly after the restart restored some confidence for Kilmarnock, but a reinvigorated Celtic piled pressure on the Ayrshire visitors and the rewards came quickly through an Anthony Stokes strike on either side of an Adam Matthews double.

Despite the heavy loss, Nicholl insisted his players coped well with the pressure and could have been in a much better position had the referee not disallowed a Ross Barbour goal which appeared to cross the line.

"We tried to change the system to match Celtic and our boys aren't used to playing like that, and they adapted well," said Nicholl.

"We changed it, then once James Dayton came in to the middle of the park I thought we would pose them a few problems. I thought we were well in the game after a dodgy start.

"We had a perfectly good goal disallowed, but these things happen and you have to just get on with it.

"All in all, we just couldn't cope with it at the end - balls were flashing across the face and they were lifted because of the crowd.

"The last 15-20 minutes were really difficult because they were getting at us and we couldn't get out.

"But there are positives - particularly in the first half there were signs that the football was coming back into them."