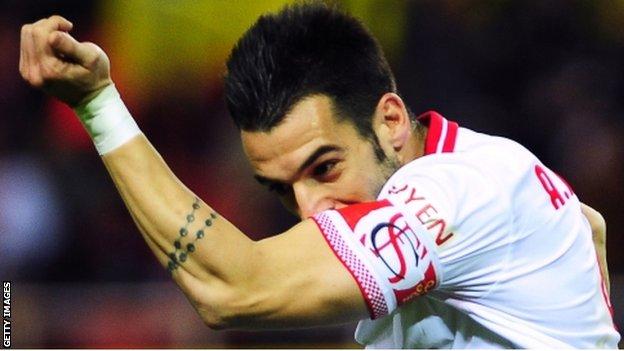 Everton have opened talks with Sevilla about a deadline day deal for Spain striker Alvaro Negredo after an £8.6m move for Leroy Fer collapsed.

Everton will resume talks on Thursday morning about Negredo, 27, who is rated at £13m by Sevilla.

However, he may be sold for much less before the transfer deadline because of financial difficulties at the club.

revealed a problem with the Netherlands midfielder's knee.

Negredo has also been linked with Spurs and was wanted by Hull City in 2009.

Everton are unlikely to revive a move for Club Brugge midfielder Vadis Odjidja-Ofoe, who almost moved to Goodison Park in August.

Everton had hoped to parade 23-year-old Fer as their major January signing but FC Twente's refusal to restructure payments on the transfer scuppered their hopes.

The Toffees were prepared to pay the full transfer fee but wanted the deal shaped around appearances and other clauses.