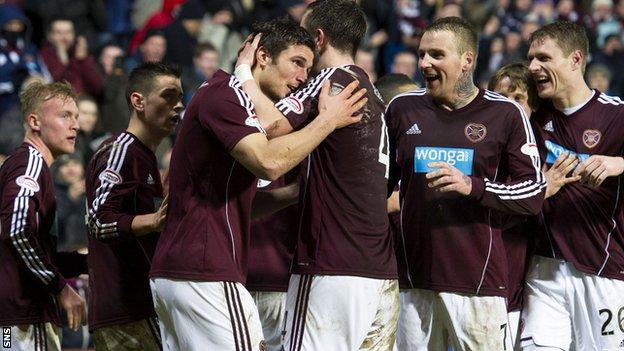 Hearts manager John McGlynn hailed the impact of his substitutes in bringing about a Scottish Premier League win over Dundee at Tynecastle.

The Edinburgh side secured their narrow victory minutes after making changes.

"Tonight it went for us. The two subsitutions - Arvydas [Novikovas] putting the ball in and John Sutton getting on the end of it."

He added: "It was what we deserved over the piece, we deserved to win the football match.

"We had some great chances and didn't take them, but the one that mattered in the end is the one that's won us the game."

But he emphasised it was the efforts of the whole team that worked for the victory which lifts them to sixth in the SPL.

"It takes everyone in the team to play as a team."

And on the popular Michael Ngoo, McGlynn added: "You have your Ricardo Fullers and everyone takes to him - big Michael [Ngoo] is a similar type of player in many ways."