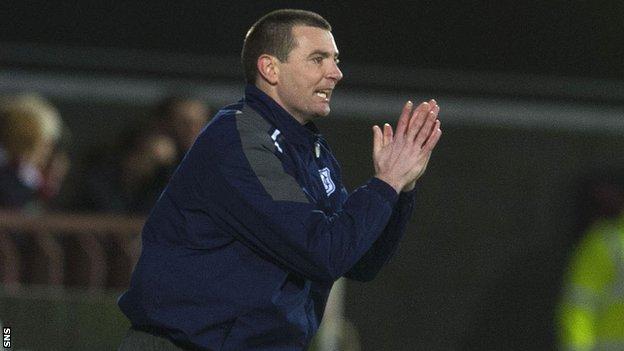 Dundee boss Barry Smith hopes to see an improvement from his players as he witnessed John Sutton score a diving header to give Hearts a late 1-0 win over his team at Tynecastle.

And Smith's evening was made worse by wins for St Mirren and Ross County, the teams closest to the Dark Blues at the foot of the Scottish Premier League.

"We feel we can do better all over the park," he said.

"The past two games we've created a lot of chances: we didn't tonight."

Smith paid credit to Hearts for their dominant performance and admitted that he may have used the wrong tactics.

"I thought we had handled them relatively well, although they had a lot of possession," he added.

"We set ourselves out in an attacking system, but possibly it didn't work."

Hearts hit the post twice through Michael Ngoo and Jason Holt and the Dundee keeper Rab Douglas had to be alert to keep his side in the game, which he did with a succession of saves until Sutton's winning header four minutes from time.

The defeat in Edinburgh means Dundee are 14 points adrift of County and the Buddies, who enjoyed narrow wins over Hibernian and Inverness CT respectively.