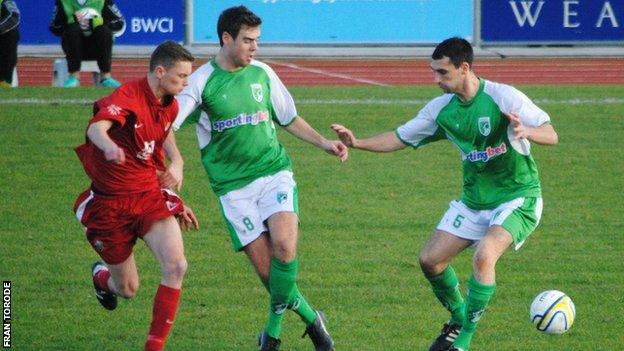 Guernsey FC boss Tony Vance says Saturday's game with Chessington and Hook United is doubtful due to the state of the Footes Lane pitch.

They have not been able to play at home since 9 December when they beat Erith and Belvedere in the FA Vase.

The poor winter weather, has seen 12 league games called off since November.

"I think the weather's not too great for the next couple of days so I think it'll be doubtful already," Vance said.

"I'd imagine Footes Lane is going to be a bit boggy to be fair, so it's got to be doubtful for the weekend," he added to BBC Guernsey.

"That'll be disappointing because it'll be another fixture that we'll lose.

"But we've had a very hectic last couple of days so we'll train on Thursday and see what happens at the weekend."

The Green Lions, who share the ground with Guernsey Rugby Club, still have 26 league games to play between now and the end of the season and have not played a home game in the league since beating Windsor 5-2 at the start of December.

due to their postponements and have managed to play just one league match since that win over Windsor.