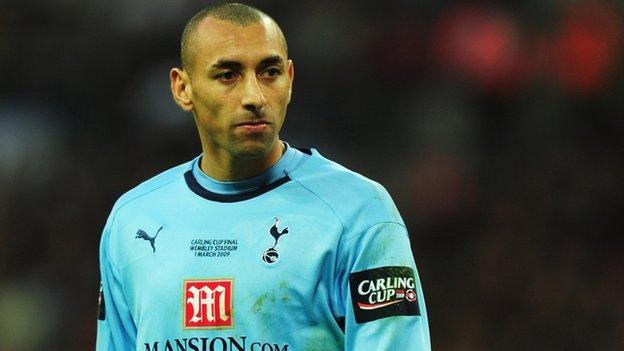 Tottenham goalkeeper Heurelho Gomes has joined German side Hoffenheim on loan until the end of the season.

The 31-year-old Brazil international arrived at White Hart Lane in 2008 from Dutch side PSV Eindhoven for £7.8m.

However, he has fallen down the pecking order in the last two seasons following the arrivals of fellow goalkeepers Brad Friedel and Hugo Lloris.

His last appearance for Spurs came in November 2011 and he has rarely made the bench in the last 18 months.

Gomes had been keen to secure a move back to his homeland in order to try to win back his place in the national squad ahead of the 2014 World Cup, but he has now moved to Germany instead.

He played a key role in Spurs conceding just 10 goals at home during the 2008-09 campaign, his first in English football. He made 42 appearances during his second season, including a 2-1 win over North London rivals Arsenal where he pulled off a series of stunning saves.

In 2010, Gomes was called up to Brazil's World Cup Squad. Although he did not see any action in the tournament itself, he played in the 5-1 win over Tanzania during a World Cup warm-up match.

The 2010-11 season was one of mixed fortunes for Gomes. Despite starting 41 of Spurs' 53 matches, he came under criticism when a goalkeeping error gave Real Madrid victory in the Champions League quarter-final.

Gomes made just four appearances for Spurs during the 2011-12 season and, so far in 2012-13, he is yet to make an appearance for the Londoners.

Meanwhile, Spurs have confirmed that 21-year-old Ryan Mason has joined French side Lorient on loan.