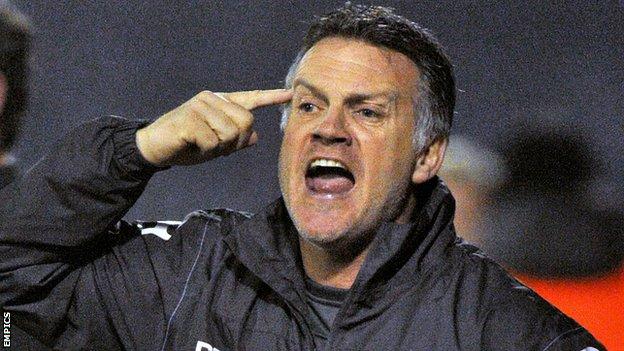 AFC Telford United manager Andy Sinton has left the club by mutual consent after a run of 16 games without a win in the Blue Square Bet Premier.

The former England international winger took over in May 2010 and led the Bucks to promotion in his first season.

Sinton's recently appointed assistant, Graham Hyde, has been put in charge in a caretaker capacity.

"Andy Sinton may well be a victim of his early success at Telford.

Given the remit to get the club promoted into the top flight of non-league football, Sinton accomplished this the first time of asking.

Since then the Bucks have struggled to stabilise themselves in the Blue Square Bet Premier, being one of a few part-time teams competing in what is now a full-time league, with a much smaller budget than most.

His job has been on the line for some time, after going without a win in 16 league games.

Whilst many fans will welcome a change of manager, in a bid to stay up, we must not forget Sinton's achievement in getting the club promoted."

"I wish everyone at the club all the best for the future," he added.

The highlight of his time in charge of Telford was a play-offs victory over Guiseley in May 2011, which saw them promoted to the top flight of non-league football.

Club chairman Lee Carter said that Sinton had "lots to be proud of".

He added: "Andy was the man who kept us in the league last season and he deserves a lot of credit for that.

"No decision like this is ever easy, but we were running out of runway."

Former Gateshead boss Ian Bogie is said to be interested in replacing Sinton at the New Bucks Head, with former Peterborough, Kettering, and Darlington boss Mark Cooper another possible candidate.

Telford currently sit fourth from bottom in the table.