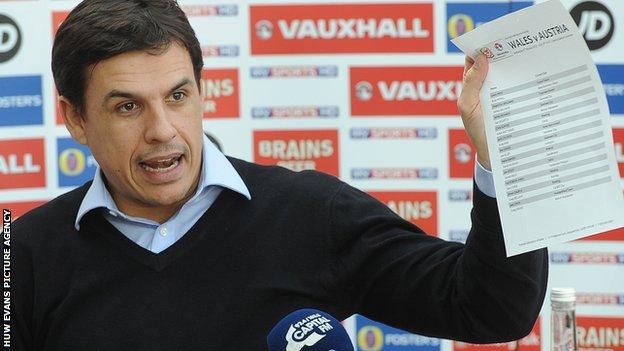 Wales manager Chris Coleman says Craig Bellamy is back on the international stage after having "fallen in love" with football again.

Bellamy is included in Coleman's squad for Wales' friendly against Austria at the Liberty Stadium on 6 February.

The 33-year-old Cardiff City striker has not played for Wales since the 2-0 defeat against Bosnia in August 2012.

"I'm delighted he is in a good frame of mind and hopefully we will have him for the Austria game," said Coleman.

"I think he has fallen in love with football again which is good news for everyone.

"It was always down to Craig when he felt he was ready mentally, as well as physically, to come back into the fold."

He played in the 2-0 friendly defeat to Mexico in New York in May 2012 - Coleman's first game in charge.

But since then he only managed 20 minutes in the friendly against Bosnia.

Having moved from Liverpool to Cardiff, Bellamy has helped to take the Bluebirds 10 points clear at the top of the Championship table.

Coleman said Bellamy was mentally right to return to the international stage.

"Speaking with him 10 days ago he feels he is in a good place at the moment," said the manager.

"Let's take it one game at a time, one squad at a time.

"Six to eight months ago he was in a different place.

"I had a good conversation with him. Cardiff are doing very well and Craig's fitness is good.

"I thought we would get him back because he has had so much to offer.

"I think he maybe lost a bit of love for football and he's always been super-passionate about football, and he's found that again.

"We will take it game by game. He has had his injury problems and he isn't getting any younger, but he has a lot to offer providing he is fit physically and mentally.

"At the minute he is in a good place and that's why he is in the squad."

West Ham midfielder Jack Collison is another to return to Coleman's squad after being beset by knee-injury problems since last appearing in the Gary Speed Memorial Match against Costa Rica almost a year ago.

Ashley Williams retains the captaincy, having taken over from previous incumbent Aaron Ramsey ahead of the October qualifiers against Scotland and Croatia.

New Leeds striker Steve Morison misses out through injury so Bolton's Craig Davies comes in to the squad, while there is also a call-up for former Wales Under-21 captain Jazz Richards.

The defender provides cover with James Collins and Danny Gabbidon both injured.