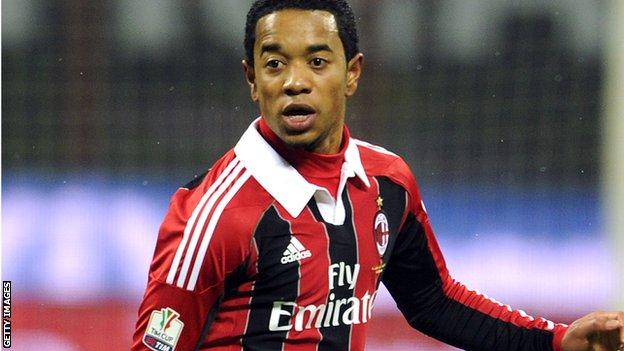 Fulham have completed the loan signing of AC Milan's Urby Emanuelson for the rest of the season.

The Dutch international midfielder played for Fulham manager Martin Jol during his time in charge of Ajax.

A product of the Dutch club's youth system, 26-year-old Emanuelson has made 60 appearances for Milan since arriving in January 2011.

Ajax midfielder Eyong Enoh has also signed on loan with an option to buy at the end of the season.

Enoh, 26, has made 126 appearances for the Amsterdam club and been capped 26 times by Cameroon. He was named as part of the Indomitable Lions' squad for the 2010 World Cup.

Jol said of Emanuelson: "He can play left midfield, wide, play number 10, [and] I feel we need fresh legs.

"I coached him at Ajax. He is a skilful player, very agile. He is very mobile and quick," Jol added following Fulham's 3-1 win over West Ham.

Jol has already bolstered his midfield with the addition of Arsenal's Emmanuel Frimpong on loan, but is also looking to add to his defence with Stephen Kelly having left for Reading.