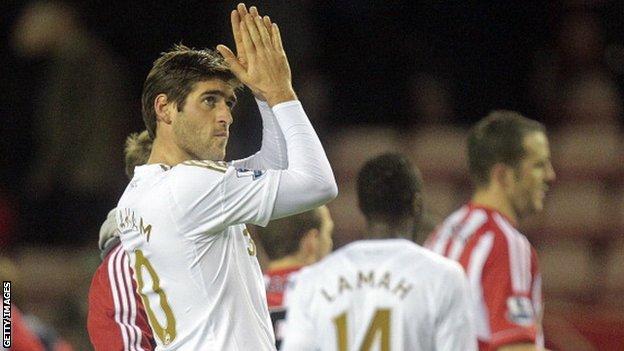 Swansea City striker Danny Graham has completed a £5m move to Sunderland after agreeing a three-and-a-half-year deal at the Stadium of Light.

But Graham has found his chances limited this season following the arrival of the club's top scorer Michu.

Sunderland boss Martin O'Neill said: "I genuinely think he'll do well for us."

O'Neill hopes Graham, who was born in Gateshead, will help ease the pressure on fellow striker Steven Fletcher, who has scored 10 of Sunderland's 27 league goals this season.

"I think he can fit in and score a few goals for us," he added.

"We want to be less reliant on Steven Fletcher scoring the goals and I think Danny will alleviate the load."

Graham was booed by Sunderland supporters when he appeared as a second-half substitute during Swansea's goalless draw on Wearside on Tuesday.

The reaction was a reflection of Graham's background and his comments about Sunderland in a fanzine interview.

But O'Neill is confident the fans will warm to his third signing of the January window following the arrivals of Alfred N'Diaye and Kader Mangane.

"I think he is himself reportedly a Newcastle fan, so the reaction to that was probably quite a natural reaction," said O'Neill.

Graham, who joined Swansea from Watford for £3.5m in June 2011, admitted it was time to move on.

"I can only speak in a positive way about the club, especially the supporters and the squad of players," he said.

"I've really enjoyed my time at Swansea, but everyone moves on at some time in football."