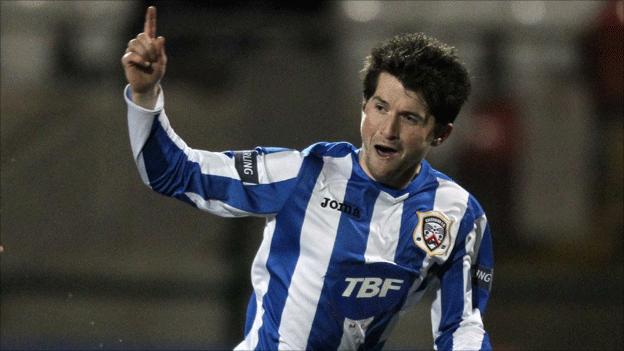 Coleraine have been boosted by the news that Gareth Tommons is to resume his career at the club immediately after returning from Australia.

The 23-year-old former Limavady United midfielder departed 'Down Under' a year ago after the Bannsiders' League Cup final defeat by Crusaders.

The club retained the player's registration while he was travelling.

"Gareth was a huge player for us in the first half of last season and we have missed him," said manager Oran Kearney.

"Obviously he hasn't played football seriously in a year, so it'll take him a while to get back up to speed, but in the time I've known him he's always looked after himself, so I view it as no different to having a player come back after a long injury lay-off.

"We'll ease him back into training and hopefully it won't be long before he's back playing again."

Meanwhile Portadown striker Richard Lecky is to remain with the club until the summer at least after requesting to be made available to other clubs during the January transfer window.

Coleraine, Ballinamallard United and Dungannon Swifts were all understood to have expressed interest in the forward.

Ports boss Ronnie McFall wants Lecky, who will be a free agent in the summer, to stay at Shamrock Park for now.

Portadown host sixth-placed Glentoran in the Irish Premiership on Saturday.

The match will be an important one for both clubs as they bid to secure a place in the top six ahead of the league split at the end of March.

Michael McNamee presents coverage of a full programme of Irish Premiership action on Saturday Sportsound on BBC Radio Ulster on Saturday from 14:00 GMT.

Joel Taggart and Tony Gorman are on commentary at Shamrock Park, where Portadown play Glentoran.

Ballinamallard United have a similar aim and they welcome back David Kee after suspension for their trip to Coleraine.

The Mallards have signed Sligo Rovers' Republic of Ireland Under-18 international left-back Colm McLaughlin on loan until the end of the season.

Linfield are still without Michael Gault and Johnny Black for their home game against Ballymena United.

The Sky Blues have new defender Shaun Maher available for selection for the first time after his international clearance came through.

Colin Coates must sit out Crusaders' trip to Donegal Celtic because of a one-game ban and Kris Lindsay misses Glenavon's match against Dungannon Swifts for the same reason.

The Lurgan Blues have moved to strengthen their squad by signing teenage forward Denver Taggart from Amateur League Division 1B side Lisburn Rangers.

The Whites have signed Steven Gordon and William Garrett on loan from Glentoran.

A minute's silence in memory of journalist Malcolm Brodie will be observed prior to each of the day's games, followed by one minute of applause.