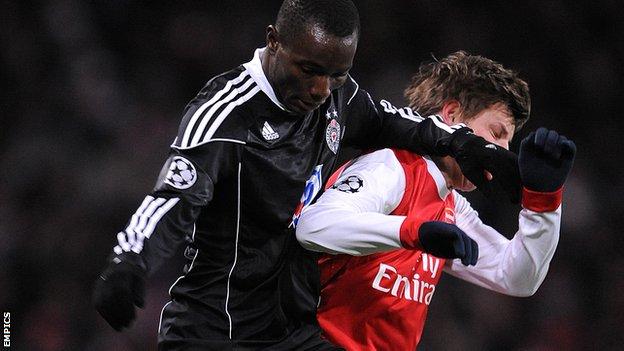 Bolton have made three signings ahead of the transfer deadline, with Medo Kamara, Cian Bolger and Steve De Ridder all joining Wanderers.

Southampton winger De Ridder has arrived on a one-month loan.

The Trotters have made six signings during the January window.

Craig Dawson, Craig Davies and Jan Gregus also agreed moves to the Reebok Stadium and manager Dougie Freedman admitted that Kamara was high on his list of transfer targets.

The Sierra Leone international began his career in Finland and has been playing in Serbia since 2010, winning the league title on two occasions with Partizan and playing for the club in the Champions League.

I didn't think I would have any chance of getting Medo

Freedman told BBC Radio Manchester: "He's got experience of the Champions League and he's played in some top games.

"He's very hungry to succeed in England and he's choosing Bolton because he feels we're in the very same situation as him, after I explained to him where we are and what we're trying to do.

"Medo and Craig Davies were the two deals I really wanted to try and do and, to be honest with you, I didn't think I would have any chance of getting Medo."

Meanwhile, striker Benik Afobe has returned to Arsenal after a loan spell at Bolton.