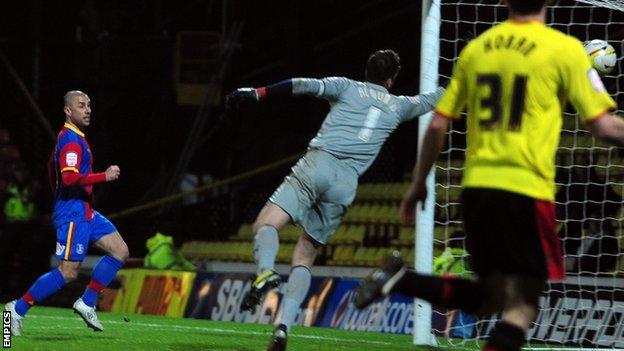 Kevin Phillips came off the bench to rescue a point for Crystal Palace in an entertaining affair against Watford.

Almen Abdi put Watford into an early lead with a well-hit effort from just outside the area before Nathaniel Chalobah headed in the Hornets' second.

But Palace responded after the break as Peter Ramage prodded home following a scramble in the area.

Substitute Phillips then completed the comeback with a neat finish at the back post for his first Palace goal.

This match pitted the two highest scorers in the division; Palace have now netted 54 goals in 31 outings with Watford scoring 60.

Phillips, who is on loan from Blackpool, began his professional career with Watford in 1994 and returned to Vicarage Road to stop Gianfranco Zola's side moving up to second in the Championship.

A win for either of these sides would have put them into the automatic places and Watford started with the early intent.

They were given some help from poor Palace defending as Jazz Richards scuffed a clearance that Abdi picked up before beating goalkeeper Julian Speroni with a well-hit strike.

Watford were in the ascendancy and doubled their lead when Marco Cassetti's shot into the ground spun to Chalobah who headed in at the back post.

Matej Vydra then headed wide from right in front of goal for the hosts before Palace, who were after their first league win away in 2013, wasted a chance when Glenn Murray had a close-range header saved by Watford keeper Manuel Almunia.

Ian Holloway's side have come from behind on five occasions this term in the Championship to win and Kagisho Dikgacoi went close with a effort from outside of the area after the break before Murray let another chance slip away after poor control in front of goal from Wilfried Zaha's cross.

However, the Eagles got back into it through Ramage with 24 minutes remaining as the defender prodded the ball home after a scramble in the area with Almunia failing to get his hands on the ball.

The draw means Leicester stay in the second spot with Watford moving to third and Palace staying fifth.

"After the first half we were not expecting anything like that. They played really well and caused us a lot of problems and we did not have the same freshness in our legs. And Phillips certainly made a difference.

"What a class act Kevin [Phillips] is, let's be honest. I don't know anyone as professional as Kevin and that was a hard chance to put away. He's 39 going on 18, and I'm delighted for him.

"First half, I thought we were too worried about stopping them. I want to attack, so I thoroughly enjoyed the second half. We got what we deserved and maybe by the end we could have nicked something else.

"We've got 15 games left - let's have a right good go at getting promotion. What we need from now on are some second half performances in the first half."