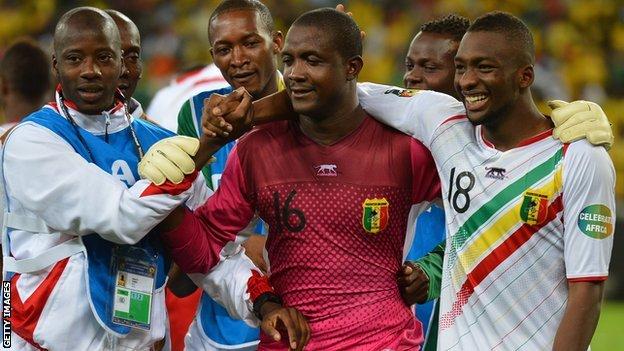 Mali reached the semi-finals of the Africa Cup of Nations for the second year running after edging out hosts South Africa on penalties.

Bafana Bafana missed three of their spot-kicks, with Lehlohonolo Majoro shooting wide to give Mali victory.

The hosts had taken the lead in the first half, with striker Tokelo Rantie firing home from Thuso Phala's cross.

South Africa were looking to avenge their defeat at the hands of the Malians at the same stage in 2002, but the Eagles again dashed the hosts' hopes, as they did against Gabon in a quarter-final shoot-out in Libreville last year.

Gordon Igesund's well-drilled side produced their best performance of the tournament in the first half, taking the game to the fancied Malians, amid an electrifying atmosphere in Durban.

Mali are now unbeaten in five Africa Cup of Nations quarter-final appearances, including two against South Africa - in 2002 and 2013

Some good pressure from the home side produced the first real opportunity, with Siboniso Gaxa finding space to cross for May Mahlangu, whose header was off target.

Reneilwe Letsholonyane slipped through a clever ball for Tokelo Rantie, which was brilliantly cut out by Mali defender Adama Tamboura. Bernard Parker's free-kick was then well collected by stand-in goalkeeper Soumbeyla Diakite.

Mahlangu played Rantie in well, with Diakite closing the Bafana Bafana striker down well under pressure.

Mali were forced into an early change, as QPR midfielder Samba Diakite was forced off with an injury, to be replaced by Sigamary Diarra.

Adama Tamboura's floated cross then almost caught Itumeleng Khune out in the South African goal, as it sailed dangerously close towards the top corner, but instead landed just over.

The hosts took a deserved lead on 31 minutes, with Khune starting the move, distributing quickly to Mahlangu who burst forward, feeding Thuso Phala, who squared for Rantie for the Malmo forward to slide home from eight yards.

The goal provided an extra incentive for the home side, who continued to press, with Oldham midfielder Dean Furman forcing a foul from Momo Sissoko, as he burst out wide.

Rantie was then forced off after picking up a knock, with fit-again striker Majoro taking his place.

Mali sought to regain a foothold in the game and Fousseiny Diawara broke well down the wing to square for Samba Sow in a good position, only for the midfielder to sky his effort high over the bar.

Substitute Diarra then curled a good shot towards Khune's far post, which was well intercepted by Furman.

The hosts started brightly again in the second half, with several testing balls from Gaxa and Letsholonyane feeding Majoro, whose heavy touch was gathered by Diakite.

But they allowed their guests back into the contest and Mali silenced the energetic Durban crowd on 57 minutes, with their ever-influential captain dragging them back into the game.

Striker Mahamadou Samassa burst through the South African defence and crossed for Keita to head home from close range past Khune.

The Malians were almost allowed to double their lead immediately, with Gaxa's mistake allowing Samassa to break into Khune's area once more, but the big Malian forward shot straight at the South African keeper.

With his team-mates tiring, Mahlangu fired in a snapped shot, which Diakite gathered well at his near post.

Neither side were unable to break the deadlock, however, and the game went to extra-time with Mali on the ascent.

Keita whipped in a dangerous free-kick, which Khune just managed to clear, as the fresher-looking Malians attempted to force their way into the lead.

Mahlangu then broke forward on the counter-attack, but shot straight at Diakite. It proved to be the last proper effort of extra-time, with both sides tiring as the penalty shout-out approached.

Substitute Siphiwe Tshabalala scored his side's first spot-kick, but Furman, Mahlangu and Majoro all missed, with Cheick Tidiane Diabate, Tamboura and Mahamane Traore all converting theirs to ensure Mali's progression to the last four.

"The South Africans posed a lot of problems in the first half and we had to change the tactics in the second half to get back into the match.

"They pressed us with a lot of diversity.

"But we knew we had to be patient and we had time to fight back."

"My boys lost with dignity, pride and passion.

"There is only so much any coach can ask from his team and my boys gave everything they had.

"It is very difficult to accept defeat when you play so well.

"Congratulations to Mali for winning a tough game for both teams."