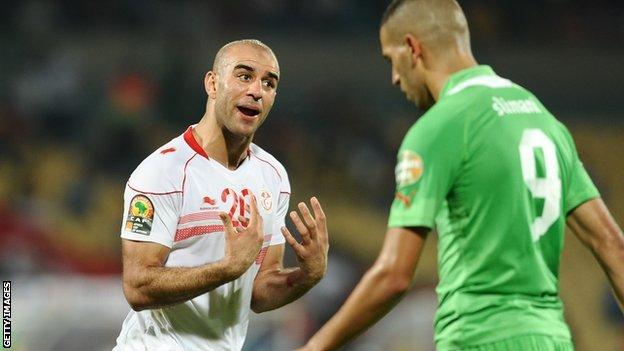 With the success of sides such as Cape Verde and Togo in reaching the last eight of the Africa Cup of Nations for the first time, one major omission from the business end of the tournament may have been easily overlooked - the absence of North Africans.

The distance between the north and south of the continent has never seemed greater, as Tunisia, Morocco and Algeria were all forced to take the long journey home from South Africa early, after falling at the first hurdle.

Added to seven-time champions Egypt and three-time finalists Libya's failure to qualify and it marks the first time since 1992 that there will be no North African presence in the quarter-finals.

It is a low point for a region more accustomed to dominating the continental scene, after producing four consecutive title wins in a row - Tunisia in 2004 and Egypt's three in a row between 2006 and 2010.

Algeria finished bottom of Group D, behind neighbours Tunisia, after claiming just a point from three games with Ivory Coast, Togo and the Carthage Eagles.

The Tunisians fared slightly better, after a fortuitous win over the Desert Foxes, defeat to group winners Ivory Coast and a draw with the Togolese - who edged them out of second spot.

Morocco, meanwhile, exited the tournament unbeaten, but three draws were not enough as they finished third in Group A, behind hosts South Africa and debutants and tournament headline-grabbers, the Cape Verdeans.

The Atlas Lions, who host the next Nations Cup in 2015 played down their early exit, with coach Rachid Taoussi claiming it may have come too soon for his young squad, after he opted to omit some experienced internationals, such as Adel Taarabt and former captain Houssine Kharja, for this tournament.

"Our priority has always been the 2014 World Cup qualifiers and the 2015 Cup of Nations, where I am confident this group of players will do well," Taoussi said.

Matters look far more serious for neighbours Algeria, however, who were the first team to be eliminated from this year's finals, after defeats to the Tunisians and Togo - having dominated both games for long periods.

"It's hard to analyse," the Bosnian coach said after the Desert Foxes' crushing 2-0 defeat to the Togolese sealed their fate, ahead of an academic 2-2 draw with Ivory Coast.

"We didn't play great football, but it's hard to blame anyone. I made the choices. I take responsibility for what happened.

"Now we'll sit down and think about the future of Algerian football."

Whether Halilhodzic - who previously coached the Ivorians to a quarter-final place in 2010 - will form part of that future will be seen after the dust has settled on a disappointing tournament for a side ranked second in Africa before it kicked off.

Tunisia, on the other hand, failed to follow-up on a quarter-final spot last year, as they were unable to capitalise on a promising start against Algeria, when Youssef Msakni fired home a spectacular late winner against the run of play.

Carthage Eagles coach Sami Trabelsi labelled their elimination "extremely harsh", after their opening victory was followed by a thumping 3-0 defeat to Ivory Coast and 1-1 draw with Togo, which saw the Sparrow Hawks through.

The BBC's Tunisian football reporter Mourad Teyeb, however, says the problem with the Carthage Eagles and North African football in general is a much wider one, with the game in need of a "revolution" of its own, in the wake of the political upheaval across the region in the past couple of years.

"North African football needs a real revolution - to its structure and mentality," he said.

"Even in Tunisia, which witnessed political change and structural change in society - it did not touch football, because the national team was already playing official games and taking part in official competitions.

"But there was no time to radically change the structure of the national team or the federation.

"So I think the big challenge is to forget about the future of official competitions like the World Cup qualifiers and focus on structural change in the game as a whole, starting from the development of players from a young age to financing the improvement of pitches, which are very bad."

The elephant in the regional room of course is Egypt - whose national side have been African champions more times than any other on the continent - but have failed to qualify for the last two editions of the Nations Cup.

The national team's slump at a time when the country has been in major political upheaval is no coincidence and the Pharaohs' form has not been helped by the suspension of the domestic league following fatal clashes between rival fans in Port Said.

Cairo giants Al Ahly provided some encouragement by winning an African title - a feat the previously dominant Pharaohs will hope to emulate once again, after a long and painful period in the wilderness for their fans.