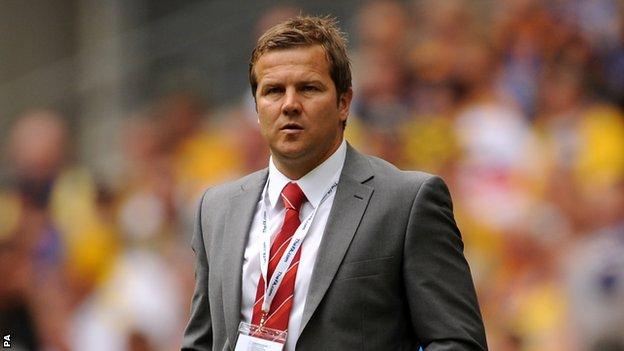 AFC Telford interim boss Mark Cooper is undaunted by the challenge of keeping them in the Blue Square Bet Premier.

Cooper has replaced Andy Sinton, who was sacked on Thursday after a run of 16 league games without a win, with the club in 21st in the table.

"It's big but not impossible. That's one thing I'll stress to the players.

"It can be done. 16 games left and plenty to play for - with a little bit of luck we should be fine I think," Cooper told BBC Radio Shropshire.

The 44-year-old, who left his job at Kettering last year because of their financial issues, has a contract to the end of the season and will be assisted by Graham Hyde, formerly Sinton's number two, and first-team coach John Psaras.

And Cooper admitted it was a quick turnaround from the moment he received a call from the club.

"It happened very quick. I got a phone call [Thursday] afternoon asking if I would be interested and that was it," he said. "I was over like a shot and it's done and dusted.

"So I'm looking forward to meeting the players and get on with it. It's going to be tough. I like a challenge and hopefully we can keep them up."