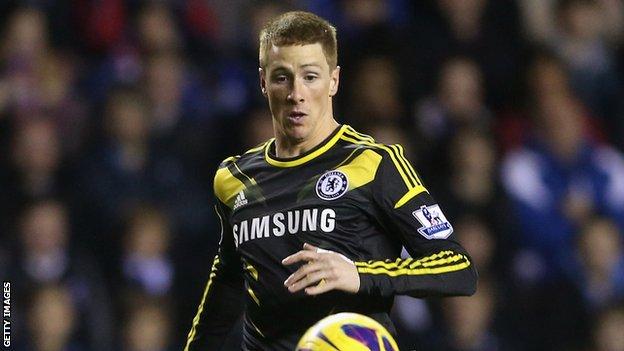 Chelsea's Fernando Torres has been omitted by world and European champions Spain for the second game in a row.

Striker Torres, 28, has 101 caps for his country, but is not part of the 21-man squad to face Uruguay after previously missing out versus Panama.

Coach Vicente del Bosque said: "Torres is one of our most experienced players but neither could we find him space."

Torres scored his 14th Premier League goal for Chelsea in the 8-0 win over Aston Villa in December, 22 months after joining the club. He took just six months to pass that mark for Liverpool.

Liverpool goalkeeper Pepe Reina will look to take advantage of the injury to captain Iker Casillas, while midfielder Santi Cazorla is joined by new Arsenal team-mate Nacho Monreal in the squad.

Despite being top scorer in Spain's victorious Euro 2012 campaign and scoring 15 goals in all club competitions this season, Torres has regularly received criticism for his performances since joining Chelsea for a British record fee in January 2011.

While Torres - who has scored one goal in his last 10 games - has struggled, Michu had been tipped for a debut call-up after netting 16 goals in all competitions since arriving from Rayo Vallecano in July.

This form saw del Bosque take in the 0-0 draw with Everton last month, and the 62-year-old admitted it had been a tough decision to leave the attacker out of next week's friendly in Qatar.

He said: "It has left a little bit of a bad taste in the mouth not to call up someone [Michu] who deserves it. But those who have been named also deserve it.

"We recognise his worth and his goals in the Premier League, but we couldn't find a space for him at the moment. In the position which Michu plays there is great competition with five or six players."