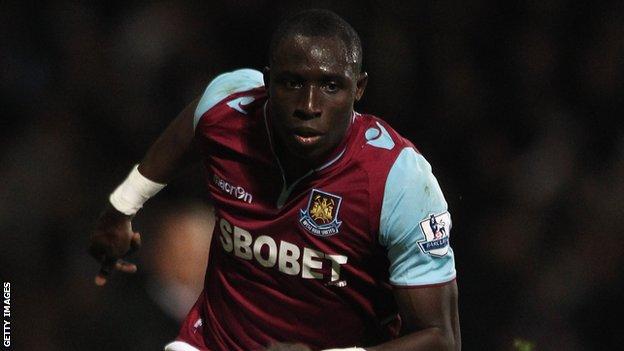 Speculation had surrounded Diame, 25, but the window closed with the Senegalese still at the club.

Allardyce said: "The most important thing at the end of yesterday was probably keeping hold of Mo Diame."

West Ham had brought in five players earlier in January, though Allardyce failed to add to that on Thursday.

Diame has made 19 appearances in the Premier League since joining on a free transfer in July after he turned down a contract extension with Wigan.

Allardyce had suggested Diame could still leave if any side met the release clause in his contract. Despite links to Arsenal, this did not occur, with fellow defensive midfielder Alou Diarra and goalkeeper Stephen Henderson making the only late exits.

On the other side of the market, defender Emanuel Pogatetz, midfielder Joe Cole, plus forwards Wellington Paulista,Sean Maguire and Marouane Chamakh had all been acquired by the Hammers.

"For us we haven't got the results we wanted to try and get for one reason or another but we haven't gone too heavy into the financial side of the market," Allardyce added.

"You're always disappointed in this window, I've never been delighted at the end of a window, in January anyway. It is always ferocious in terms of what you want to do but we have done as well as we possibly can do."