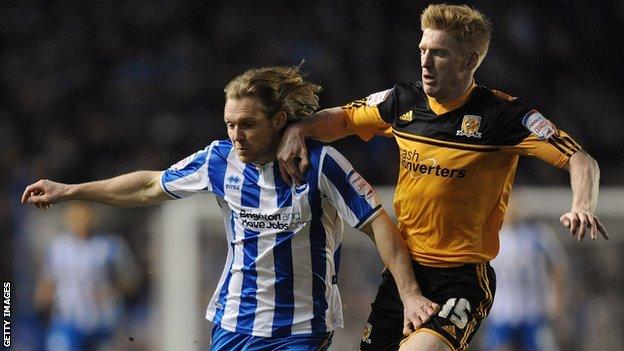 Former Spain international Vicente struck a late free-kick as Brighton moved to within two points of the play-off positions with a hard-fought win.

The substitute drilled a low shot from the edge of the box, which was too powerful for keeper David Stockdale.

The Tigers keeper had made smart saves to deny David Lopez and Andrea Orlandi.

Brighton's Tomasz Kuszczak kept out Robbie Brady and Ahmed Elmohamady shots as Hull failed to take a point that would have moved them up to second.

Steve Bruce's side went into the game knowing that a draw would move them above Leicester following their surprise slip-up at bottom-of-the-table Peterborough.

And with the best away record in the division, Hull would expect to take something from a Brighton side that had won just two of their last 10 games.

But the Seagulls had the better of the first half. Stockdale was at full-stretch to turn away Lopez's delightful curling effort and, moments later, was alert to tip over Orlandi's fierce 20-yard free-kick.

The visitors came to life in the second half with Republic of Ireland winger Robbie Brady terrorising the Seagulls.

An early left-wing cross took a horrible deflection off Bruno Saltor but former Manchester United keeper Kuszczak clawed it away from under his crossbar.

Brady then picked out Robert Koren but his header was palmed away by the Poland international.

Kuszczak's best was still to come when he first kept out Brady's thunderbolt strike from 30 yards and then reacted quickly to save Elmohamady's low volley from closer in.

It gave Brighton the platform to snatch the win and the chance arrived seven minutes from time when Orlandi was tripped just outside the box by Corry Evans.

Vicente stepped up to fire a low drive, which Stockdale got a hand to, but not enough to stop the ball from crossing the line.