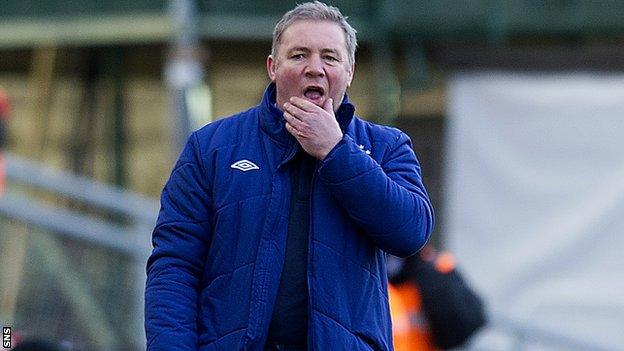 Manager Ally McCoist was critical of some his senior players after Rangers crashed out of the Scottish Cup with a 3-0 loss at Dundee United.

"It was certainly poor," said McCoist. "Probably our bigger SPL players should have done better today.

"It was a disappointing day for one or two who, with SPL experience, would hopefully have done better.

"When criticism is due and warranted, believe me, they get it. Some of the players got it today after the game."

The home side opened the scoring inside the first minute at Tannadice through Johnny Russell, who completed a double in the second half, after Jon Daly doubled the advantage in a one-sided match.

The visitors were without influential skipper Lee McCulloch but they did have a starting line-up boasting players with recent experience of playing in the top flight - in the shape of Lee Wallace, Ian Black, David Templeton, Francisco Sandaza and Dean Shiels.

We definitely missed our support, that goes without saying

"The flip side of the coin is that United knocked us out twice in the last three years when we had Allan McGregor, Nikica Jelavic, Steven Naismith, Steven Whittaker, Steven Davis," added McCoist.

Rangers responded to calls for a boycott from fans groups when they opted not to take their ticket allocation for the first away fixture against SPL opposition since they were denied entry to the top-flight after liquidation was confirmed in the summer.

A small band of 365 away supporters did attend the game but, while conceding Rangers missed their usual vocal support, McCoist denied that it had an impact on the result.

"You would obviously miss it because the support have been with us all the way through the season," he explained.

"I would never say it was a factor in the defeat. Not at all. Far from it.

"We definitely missed our support, that goes without saying because they have followed us all over the country.

"But it wouldn't be a major factor in the defeat."

Rangers were reduced to nine men in the latter stages, when Kal Naismith was shown a straight red card and Black picked up a second booking.

"It was disappointing. I didn't think there was a lot in Black's second tackle to be honest.

"These are just wee instances within the game; I'm more concerned with the quality of goal we lost."