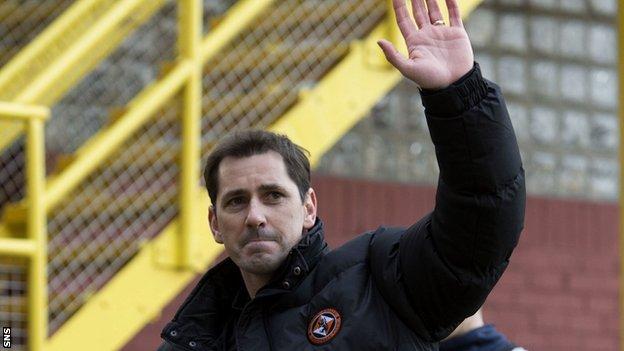 Jackie McNamara was unsurprisingly "delighted" as he reflected on a winning start to his managerial tenure of Dundee United.

And in reference to Russell's first-minute opener McNamara joked: "I hope they start like that every game."

The win at Tannadice completed a whirlwind end to a week for McNamara, who had been a winning manager with Thistle only the previous Saturday.

And, though the Tangerines' starting line-up was unchanged from their previous match, McNamara's tactical imprint paid dividends with Daly adding to Russell's opener before half-time and the latter sealing the win late on.

"It's the first game and I'm delighted," said the former Scotland international.

"We can only get better," McNamara told BBC Scotland.

"Second half, they were a wee bit nervy, possible because they've not won at home since August and it was eight games since a clean sheet.

"So, I'm delighted for the defence as well as the attackers.

"I like that system, it's not a 4-5-1, it's a 4-3-3. Russell and [Gary] Mackay-Steven have got a freedom to go and express themselves and I think they're movement would cause anybody problems, as we saw with the goals.

"I like to keep two players up [when defending] and the players knowing who they're picking up so there's no excuses.

"A lot of things pleased me. There's a few things I know we need to work on in terms of possession of the ball when we're under the cosh a little bit."