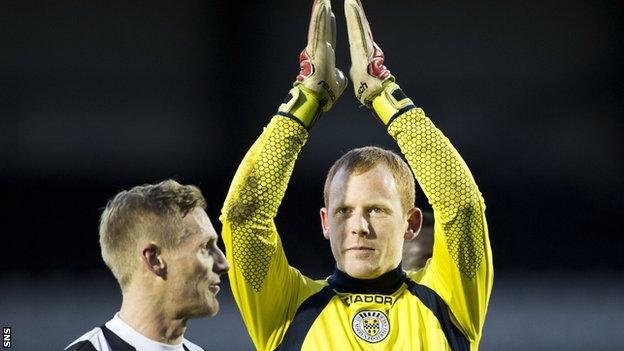 St Mirren manager Danny Lennon was equal in his praise for Esmael Goncalves and Craig Samson after the Scottish Cup win against St Johnstone.

Goncalves scored twice and Samson saved a string of the visitors' chances.

"We made one or two we tactical changes at half-time and we got the dividends of that through Goncalves - he always looks like he's going to do something."

After a bright start from the home side, Samson was called upon to save from Steven MacLean and Rowan Vine in spectacular fashion.

That kept St Mirren level at the break and allowed them to come out rejuvenated in the second half.

"We got off in the game in a good manner," Lennon said.

"But St Johnstone put one or two balls into the box, making one of two very good efforts and Samson really kept us in it at that time.

"They were key moments in the game for us.

"We re-grouped and asked the players for one last effort before we go into a recovery week - and they gave us it.

"The clean sheet was important for us today."

Portuguese forward Goncalves scored his third and fourth goals in three games since his January move from Rio Ave.

He got opened his St Mirren account on his debut against Celtic in the League Cup semi-final then followed that up with another against Inverness CT on Wednesday.

The 21-year-old's first in this match came via an excellent header from Gary Teale's cross.

He doubled his tally just before the hour, shooting low into the bottom corner from a crowded penalty box.

Lennon said: "You could see glimpses of it in the first half and he took his goals really well - he was unfortunate not to get a hat-trick.

"It's been a fantastic week for him and a great baptism.

"He's certainly come and improved the group we have here.

"He's made a fantastic contribution to Scottish football."