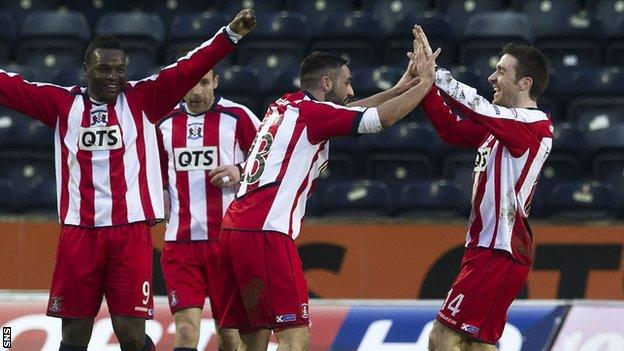 "Heffernan got two goals showing a wee bit of composure, and everything went right for us on the day," he said.

"It just shows you how substitutions go for you accidentally and it has worked out for Heffernan today.

"But there is no getting away from his composure for the first one and his quick-thinking for the other one."

Heffernan was one of several experienced players on the bench for the fifth-round tie as manager Kenny Shiels kept faith with Mark O'Hara, William Gros and Ross Barbour after bringing in a number of youngsters for the midweek defeat by Celtic.

But the Irish striker came on just before the break after Cillian Sheridan pulled up with a hamstring injury and struck twice to sink the Highlanders at Rugby Park.

Heffernan drilled home in the 58th minute following a break of the ball and flicked home Barbour's strike with five minutes left.

Nicholl said: "We knew it was going to be difficult because of the way they have been this season and what we had on the park, with the inexperience.

"The manager had a decision to make and it turned out to be the right decision to stick with the young lads, Barbour and Gros and O'Hara.

"They did really well. I thought Willie Gros was excellent up front, O'Hara's composure, and Barbour's willingness, and then the attitude of the senior players who might have been disappointed they didn't start."