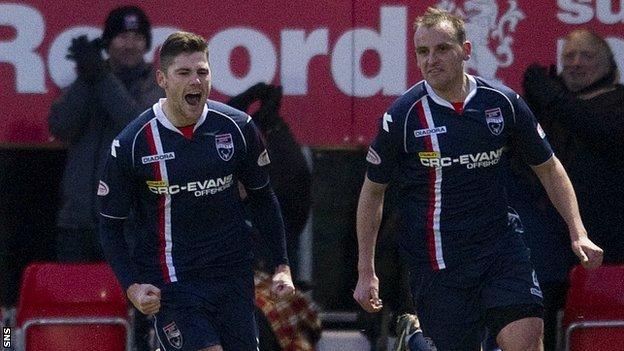 Ross County manager Derek Adams beamed with pride after his side fought back to claim a draw against Hearts and continue their unbeaten run in 2013.

"We've done exceptionally well and against a lot of good teams and we've picked up a lot of points over the last four games," Adams told BBC Scotland.

"We've been very competitive and I'm just delighted with the performance levels of the team."

"Of course it is and it is not just for the teams in the bottom six but there's teams in the top six that'll be looking over their shoulder as well," he explained.

"We want to stay in the SPL, we want to move up and be successful."

Adams made several signings during the January transfer window and the County boss feels the player pool has shaped up well for the rest of the season.

"We've got a Swiss, a Greek, two Scottish boys, we've got a Canadian that can come in and then we've got a German up front," he added.

"Into that, we've got some Englishman and Irishmen as well.

"It's made us stronger as a group. We've moved on nine players, we've taken in five. We do look like a strong unit and we've got that togetherness that has taken us this far."