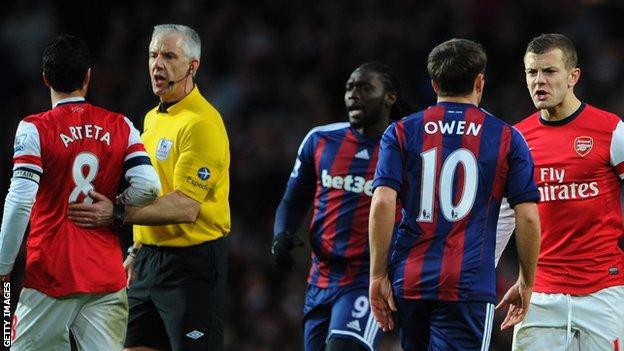 Stoke striker Michael Owen will not face a Football Association charge for reacting badly to a Mikel Arteta tackle in a defeat at Arsenal.

Owen, 33, appeared to thump Arsenal midfielder Arteta on the back towards the end of Stoke's 1-0 loss.

Referee Chris Foy saw the incident at the time, which ruled out the FA taking retrospective action.

Stoke boss Tony Pulis said: "Arteta's challenge was poor, but Michael should not do that."

The Potters had fallen behind to Lukas Podolski's deflected free-kick when Arteta challenged Stoke substitute Owen in Saturday's match.

Former England international Owen reacted angrily and appeared to lash out at the Spaniard but was not booked.

Arteta said the pair had apologised to each other after the game and that he was keen to move on from the incident.

"There was a bit of tension," Arteta told BBC Sport.

"I said, 'Michael, I'm sorry', he did the same thing and it finished there and there are no problems now."