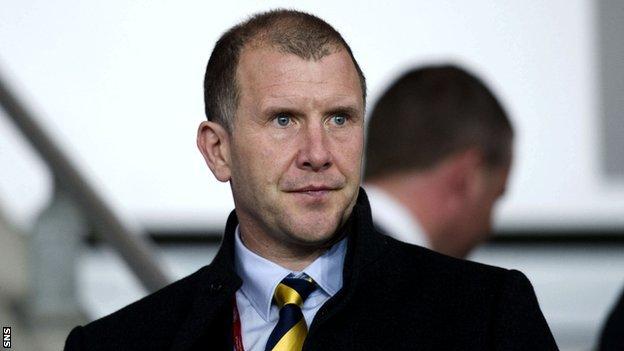 Host Kenny Macintyre, sports writer Graham Spiers and broadcaster Stuart Cosgrove put a range of questions to him on the astonishing events of last summer where Scotland's football authorities wrestled with the unravelling of Rangers following the club's slide into administration in February and its re-emergence under a new company.

What happened in the summer last year was a hugely complex issue. It blew Scottish football off course

Why do people have the perception that you are a Rangers hater?

"In my first year I was referred to as a Celtic hater. I am not sure how people arrive at these sorts of views.

"I am here to carry out the Scottish FA's rules, regulations and articles in the best way possible and to make sure we deal with everybody as fairly as we can."

Can it be argued that you did more than most to try to ensure that Rangers didn't drop to the Third Division?

"What happened in the summer last year was a hugely complex issue. It blew Scottish football off course.

"I was one of a number of people who were part of a working group designed to try and put the best possible plan in place for Scottish football.

"That involved the [Scottish] Premier League, the [Scottish] Football League and directors of the SFA and what was delivered was a proposal which ultimately got turned down.

"We ended up getting the clear views from the clubs that that [keeping Rangers in the SPL or placing them in the First Division] wasn't the direction they wanted to take."

Do you regret saying that Rangers dropping to the bottom tier would mean the "slow, lingering death for the game in Scotland"?

"You had a series of contracts which relied heavily on the Old Firm and Old Firm matches.

"Scottish football hasn't got a huge amount of cash and if somebody tells you that one of the clauses in those key contracts could be exercised if the Old Firm teams aren't able to play each other, then you have to take that seriously.

"The key people on the working party were trying to explain the potential consequences of Rangers going anywhere other than the top two divisions."

Were you wrong about the slow death?

"We are still in a very difficult situation. You hear every week about clubs being unable to pay players and bills.

"My comment at the time was designed to try and make an impact, to make people think about the potential consequences for the game.

"That was mitigated by the work done over the summer in securing improved commercial terms. Let's hope we can rebuild Scottish football because that's what's important."

It's OK having sporting merit but if you haven't got any money to run your game and you end up with clubs going down the tubes, that doesn't help anybody

On the turbulence of last summer...

"It was a changing mood every day. The situation was made worse because Rangers moved from being a club in administration trying to do a company voluntary arrangement, to a club facing liquidation and becoming a newco.

"That meant there were different rules that would apply within the articles of the Association and within the League.

"All three bodies sat around a table and discussed a plan that would rebuild Scottish football going forward.

"I chaired a number of the meetings and I presented the facts to the people around the table as a summary of what had been agreed.

"The fact that certain pieces of information got leaked to the press somehow portrayed me as being this protagonist trying to protect Rangers against the wishes of the fans.

"The plan couldn't be manufactured, the plan could only be agreed by the three governing bodies [SPL, SFL and the SFA].

"A plan had to be presented to the clubs to decide what was best for the game.

"It's OK having sporting merit but if you haven't got any money to run your game and you end up with clubs going down the tubes, that doesn't help anybody.

"This was a new situation. The two leagues have different rules governing how they deal with clubs in financial difficulties.

"That's why all three bodies tried to come up with an agreement as to how to take it forward.

"When you look at how newcos are dealt with in leagues around the world there aren't any common approaches, there aren't automatic plans that say a newco club has to be taken down the very lowest level of football."

Didn't you fail? You said, 'we cannot sit back and let this happen.' You said Rangers could not plummet to the lowest tier.

"Yes, Scottish football was unable to deliver. The people who said this is the plan we would like to take forward, that provides the greatest security for the game, that plan was overturned and that is what a democracy is all about."

Should you have done anything differently?

"When the plan was presented to the clubs for consideration it was presented as a package of measures. Included in all the debate was trying to reconstruct the leagues at the same time.

"I think in hindsight, the game, and myself, tried to take on too much. If we had broken it up into bite-size chunks it would have been more manageable."

Do discussions about Scottish football focus too much on the Old Firm?

"There are two huge clubs in Scotland which are driving the value, whether it's television deals or fans bases or the whole economic impact on local economies - you have seen that with Rangers fans going all over the country."

Is there a problem with your credibility, give the statements you made last summer about the game withering on the vine?

"We are a governing body. We are not here to win a popularity contest. We are here to do a job, to govern the game. We are driving forward an agenda to build the game."

What benefit has the ordinary Scottish football fan seen in your time in charge?

"My time in charge has been about driving forward the recommendations from the McLeish Report, growing participation, improving performance, trying to build an environment where the game can be respected and trusted to lead and deliver better financial returns.

"However, the media focuses on the performance of the national team, the trials and tribulations of Rangers and Celtic, and disciplinary actions.

"What they don't see is all the great work going on with schools, coach education, women's football, disability, black and ethnic minorities. People see what they want to see."

There must have been times you've considered walking away, that it's just not worth it?

You can listen to the whole Sportsound Extra programme on the BBC iPlayer until 9 February.