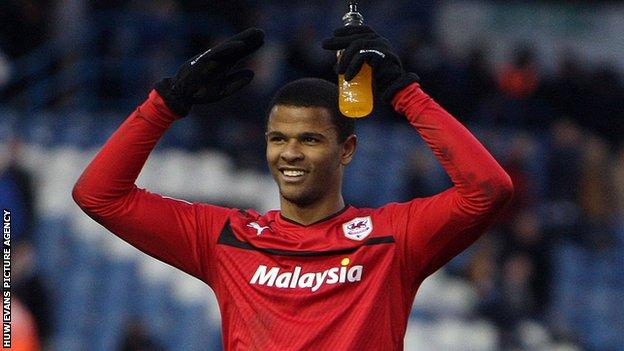 Campbell, recruited from Sunderland, scored two minutes after coming off the bench to secure a 1-0 win at Elland Road.

The victory lifted Cardiff 10 points clear at the top of the Championship.

"I am delighted for Fraizer. He is very humble and has rapidly bought into our team ethic," Mackay said.

"He is a willing runner and an intelligent footballer who knows where the goal is.

"He has not played a lot of football lately so the mind was willing and the flesh was weak, but he will soon be up to speed.

"We needed to get him match minutes, but at the same time we need to protect him [having] not played too much football recently.

"He's another one that desperately wants to play football and wants to be part of the group, which is great."

The victory was Cardiff's fifth successive away win in the Championship and restored their 10-point lead at the top of the table and Mackay's side have now dropped only two points in their last seven matches.

And the manager was delighted with victory over a Leeds side fresh from their FA Cup win over Premier League Tottenham the previous weekend.

"We knew it was never going to be easy. Leeds had won their last six home games and it was always going to be tough," Mackay added.

"They had a great result against a Premier League team and absolutely deserved it so to go out there and play the way we did and get the win, I'm very proud of them.

"We had to make sure we came up here with a game plan, dug in and we got the result in the end and delighted for our fans.

"We need to keep winning games, we need to keep being consistent and my team need to keep playing the way they're playing and playing for each other, which is more important than anything."