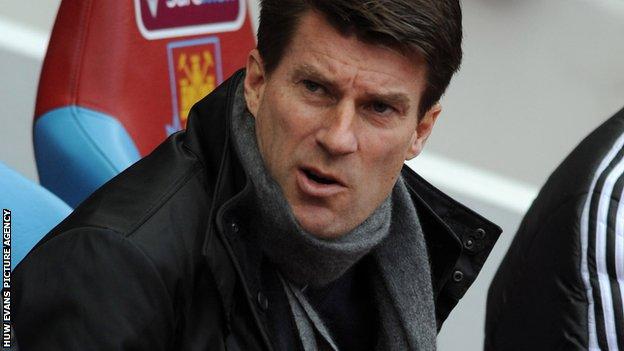 The Swans rarely tested Jussi Jaaskelainen but manager Laudrup was not too despondent.

"I hate to lose games, but I can't really say we did anything specifically wrong," Laudrup said.

"We could have won 1-0 or it could have been 1-1. After they scored we came back, had a few chances to equalise, but we just have to accept it.

"We're very difficult to beat. Nobody likes to lose. We're not used to losing after the last seven weeks.

"They gave us more or less what we expected. We had the ball more, but they played direct and we know how good Carroll is in the air.

"Inside the box he's very dangerous."

Swansea captain Ashley Williams was disappointed his side's unbeaten run came to an end at Upton Park against a team they had beaten 3-0 at the Liberty Stadium in August.

But Williams, who will join up with the Wales squad for Wednesday's friendly against Austria, says Swansea will bounce back.

"We're disappointed that we lost, but it's not all doom and gloom - we've done well in recent weeks," Williams said.

"We'll go again and pick ourselves up after the international games and go again at QPR.

"It wasn't pretty and we're disappointed to lose that game.

"We had a few chances to score and they were always going to be strong from set-pieces and I think the first to score was going to win the game."