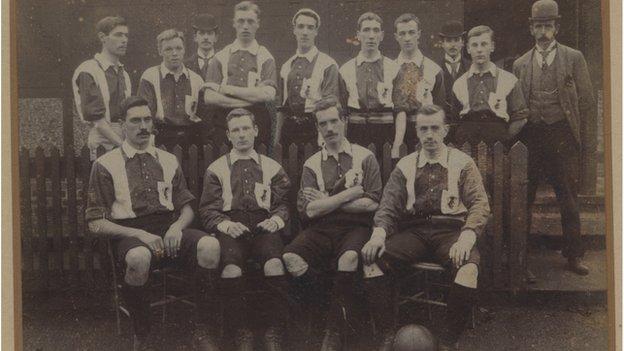 When England's players kick off the Football Association's 150th anniversary celebrations against Brazil in front of a 90,000 sell-out Wembley crowd on Wednesday, spare a thought for Civil Service FC.

Why? Because Civil Service FC is the only surviving founder member of English football's governing body. Like the FA that it helped create, the west London side is also commemorating its 150th anniversary.

The club will mark the occasion over the next year. But on Wednesday night, the players will be training on a school playing field with only plumes of their cold breath for company.

In recognition of this football missionary work, Civil Service FC were granted honorary life membership of both Slavia Prague and Real Madrid. There will also be a presentation to the club by Fifa later in the year.

There has been acknowledgment closer to home, too, with the FA scheduling a match between an amateur representative team and Civil Service FC to mark the 150th anniversary of the first ever fixture played under FA rules.

Greg Demetriou, who is leading the FA's anniversary plans, said: "We felt it important to recognise Civil Service's unique status. The game against them on 19 December will actually conclude our celebrations. We think it's a nice way to involve the club."

Civil Service FC actually existed more than 150 years ago, but a lack of documentation has led the club to take its anniversary from the ground-breaking meeting at the Freemasons' Tavern in London on 26 October 1863 when 11 clubs agreed to form a football association and establish a single code of rules to regulate the game.

Representing Civil Service FC at the meeting was George Warne, a clerk in the War Office who played full-back for the fledgling club.

Civil Service FC played in the early years of the FA Cup but it was in Europe that the club next made its mark over a 25-year period from 1901.

"We and Corinthians did more than any other club towards the development of the game on the continent. We had the advantage of an embassy network, the Foreign Office and the like," says Neil Ward, a former player and manager at Civil Service FC who is now chairman of the club's 150th Anniversary Committee.

"In the early years we went to Prague, Vienna and Budapest. We have a great picture of the Crown Prince of Germany watching our game against Germania in 1905 from a dining table by the touchline.

"After the war it was difficult to get to those parts of Europe and so we often went to Spain. It took 36 hours to get there. We must have one of the best records of anyone against Barcelona and Real Madrid - we played each of them four times, won two, drew one and lost one."

The club started touring Europe again in 1975 after a break of almost half a century. Speaking to Joe Gervasio, the club's longest-serving current player, it becomes clear that the tours represent a bygone era in more ways than one.

"The standout moments for me have been the tours," said the 53-year-old, who has now played for all nine of Civil Service FC's teams, including the veterans.

"When I started there were a lot of civil servants coming to London because of their jobs and so they were away from family and friends, and probably staying in hostels. So the football club really was their social life. Now, more people are local and the social side has fallen away a bit. The tours are the one time when we all get together."

The club has lost a lot of its players in recent years due to the government's decentralising of the civil service - something that has happened before, notably in the 1960s when the club struggled to field two teams. It is now able to maintain eight teams in the Southern Amateur League, plus a veterans side, by waiving the traditional 10% cap on non-civil service members of the club.

Bob Spiller joined the civil service in 1952 and went straight into the Civil Service FC first team as goalkeeper. Now a life member of the club, the 84-year-old recalls the post-match cleaning ritual in the 1950s:

"We had a 4ft by 4ft plunge bath. Before the game you had to take the grating off the top, half fill it with boiling water and then top it up after the game with cold water. Four or five of you at a time would then get in.

"If it was a muddy day and you were one of the last to bathe you'd be confronted by a thick film of scum on the surface of the water. It wasn't any nicer under the surface either. You didn't stay in there for long."

Nonetheless, finances are tight, as with any amateur club, and Ward has called for more help from the FA.

"We're keen for them to embrace us more than they have," he says.

"We are most grateful for what they are doing but we had, perhaps naively, expected them to be inclusive of us as the last of the original FA family. We've asked if maybe they can introduce us to their sponsors - we're a poor club and something like a new kit would make our anniversary all the more special."

The FA insists Civil Service FC are in its thoughts and says it will give the club more exposure in the build-up to their match against a representative side in December.

That game will - hopefully - be played with the cordiality of the first fixture under FA rules 150 years ago. There has not always been a warm and hospitable reception on the pitch for civil servants, mind you.

Gervasio explains: "We used to get a lot of abuse back in the day - opposition players would say things like 'you must be a taxman' and then stick the boot in."

Thankfully for the beautiful game, Civil Service FC have left a more positive and enduring footprint on footballing history.