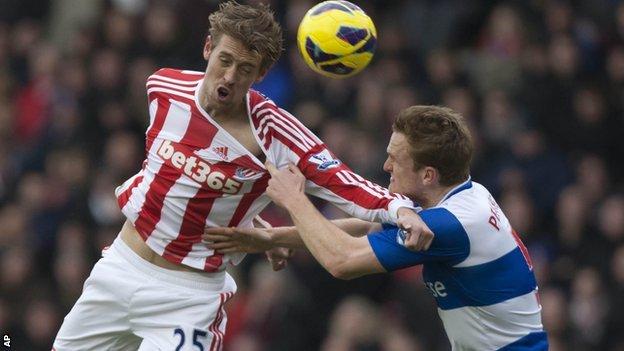 Robert Huth and Cameron Jerome struck second-half goals to give Stoke their first win in 2013 and end Reading's resurgence at the Britannia Stadium.

Adrian Mariappa scored but Reading were unable to find another late recovery as Stoke hung on to leave the Royals just above the relegation zone.

Huth headed in off the underside of the crossbar, before substitute Jerome smashed in a second on the turn.

Brian McDermott's side had taken points from their last four Premier League games with late goals but Premier League player of the month Le Fondre's only impact saw him go down in the box under a challenge from Ryan Shotton in injury time.

The Potters dominated possession with winger Matthew Etherington picking out Peter Crouch with a couple of early crosses. But the striker's radar was way out as he failed to get a header on target.

"Stoke's first victory since Boxing Day was hard-won against an obdurate Reading side. Huth and Jerome looked to have made it safe for the Potters, Adrian Mariappa got one back, but there was to be no repeat of the late, late show for the Royals."

Stoke cranked up the pressure just before the break, forcing five corners in the space of two minutes as Reading were desperately hanging on for the half-time whistle.

Adam Federici tipped away Ryan Shawcross's flick and was at full stretch to keep out Crouch's far post volley.

When the Australian keeper was finally beaten by Huth's low shot from the edge of the box, Stephen Kelly scrambled his effort just wide.

But Reading's resistance of the aerial bombardment was finally breached midway through the second half.

Glenn Whelan's inswinging corner was met by Huth, who rose above three Reading defenders at the far post, to crash in a header off the woodwork.

The goal lifted the tension around the stadium just as it was looking like Stoke, who went into the game with just one win in 10 Premier League games, could be denied again.

And the second arrived 14 minutes later when Mariappa failed to deal with Huth's long ball. The defender's mistimed header dropped for Jerome, who used his strength to hold off Alex Pearce, before turning and driving in a fierce strike giving Federici no chance.

Mariappa soon scored from a corner at the other end but Le Fondre could not summon up another late goal as the Royals lost in the league for the first time since New Year's Day.

There were 107 aerial duels in this match (50-50 challenges in the air) - 34 more than in any other Premier League game this season.

"We should have come in at half-time winning the game. We got stronger and stronger as the game went on.

"The disappointing thing is we've conceded from a set -lay because I don't think Asmir Begovic has had anything to do until he's picking the ball out of the back of the net."

"Most people would say it was a stonewall penalty. It's a very unfortunate that (the referee) has decided not to give that. In my opinion it's a penalty but he's had one look at it and not given it.

"I thought we would get at least a point but they don't lose many games here."