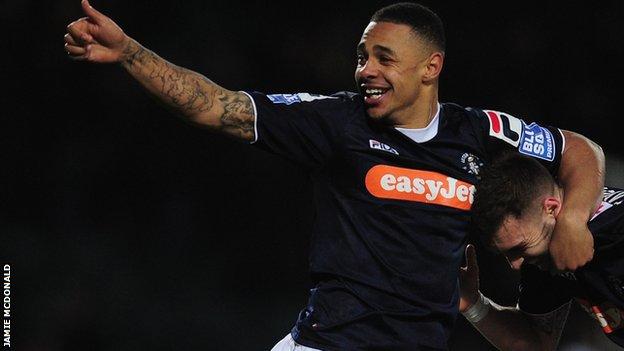 Luton and Forest Green both finished the game with 10 men as neither could force a win in a game between two of the division's promotion-chasing sides.

Gray then fired a penalty over the bar after he was fouled by Eddie Oshodi.

Luton's Alex Lawless then received two yellow cards before Al Bangura was sent off for violent conduct soon after.

"I'm lost for words where that's concerned [the sending off of Alex Lawless]. It was a shoulder to shoulder incident and he's given Alex a second yellow.

"If we win our games in hand we still have a chance (of automatic promotion).

"I'm very happy with the players but not with the result."

"It's a point and it means that they don't get any nearer to us, which away from home at this stage of the season is vital.

"I think we deserved the point, we've had some poor decisions given against us but you expect that, and we've come through it.

"To a man, they stood up and they were counted. If any side was going to score a second goal it was us.

"We're a very young side but we looked really strong mentally and so when it comes to a battle, we now look as though we're resilient and we can handle the pressure."