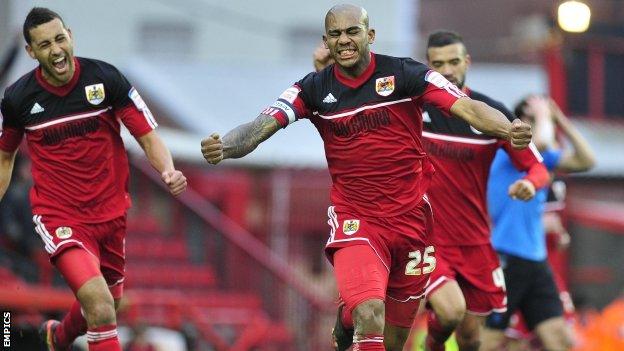 Sean O'Driscoll sent the perfect message to his former employers as his struggling Bristol City side defeated Nottingham Forest.

O'Driscoll was sacked by Forest on Boxing Day with the club on the fringes of the play-off places, before he was taken on by City in January.

Steven Davies opened the scoring after the break when he fired a low shot into the bottom corner.

Marvin Elliott made it 2-0 to move the hosts within three points of safety.

The Jamaica midfielder's goal, midway through the second half, came on his 200th start for the Robins.

Forest should have taken the lead in the opening 45 minutes when Dexter Blackstock, back in the Forest starting line-up, inexplicably hit the woodwork with a shot from two yards out.

Greg Cunningham had the best chance for City in the half when his goalbound shot was pushed wide by goalkeeper Karl Darlow, while goalscorer Davies narrowly missed with a free-kick.

Two minutes after the break, Forest striker Billy Sharp had the ball in the net but was ruled offside and a few moments later the ball was in the net at the other end when Davies span and fired in the opener - his 10th goal of the season.

Robins keeper Tom Heaton then made a brilliant save with his feet to deny Sharp and keep his side in front and midway through the half Stephen Pearson's free-kick was met by the head of Elliott, who powered in from five yards to seal the win.

Defeat was Forest's third in succession and leaves them in mid-table, six points shy of the play-offs and without a win on their travels since November.

Bristol City manager Sean O'Driscoll: "People asked me if I wanted to win more because we were playing Forest and I didn't understand the question.

"How could I want to win more than usual? If that was the case I must have been approaching other games the wrong way.

"Forest are a great club with a great fan base. What they need is great owners.

"I got on with everyone there except the owners. It was nice to be cheered by their fans, but I would have been disappointed if they had insulted me after I left the club a point outside the play-off zone."

Nottingham Forest caretaker manager Rob Kelly: "The biggest job for Billy (Davies, the club's incoming manager) will be to sort out the team's inconsistency.

"By looking at it coldly from the outside I am sure he will be able to come up with some ideas.

"Those of us close to the players know there is no problem with their level of commitment.

"We defended poorly for the first goal and were disappointed to concede the second from a set-piece because we work hard on them."