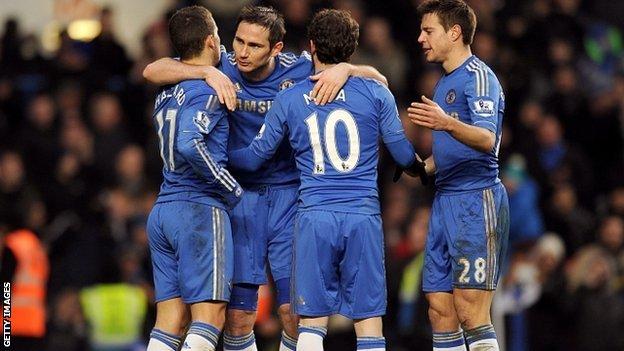 Frank Lampard provided another reminder of his enduring value to Chelsea by inspiring the victory over Wigan that ends a four-match winless run and eases the pressure on manager Rafael Benitez.

Goals from Ramires and Eden Hazard had put Chelsea 2-0 up, only for Shaun Maloney to pull a goal back for Wigan.

Lampard fired in Chelsea's third goal before Marko Marin headed in late on.

This was not a vintage Chelsea display but the result sees them leapfrog Spurs to reclaim third in the league table.

The two late goals put a gloss on the scoreline but in truth it was harsh on Wigan. For long periods, especially in the second half, Roberto Martinez's side threatened to make it another nervy afternoon at Stamford Bridge. Lampard's intervention ensured it was anything but.

The 34-year-old's fierce low shot for Chelsea's third goal capped a fine week and once again ensured the subject of his future at Chelsea was the talking point of the day. Lampard is now four goals from levelling Bobby Tambling's club record of 202.

For Wigan, the picture was altogether more bleak. Martinez will take the positives but now faces having to repeat last year's great escape to avoid relegation.

Stamford Bridge was once again subdued on a cold, damp day in London but having won just once at home since Aston Villa were beaten 8-0 before Christmas, this was both a welcome and overdue victory. With Juan Mata nursing a cold, Benitez unleashed David Luiz in midfield and the Brazilian captain thrived in the heat of the battle.

It was the Brazilian who swept Chelsea forward on their way to the opening goal, slipping beyond Roger Espinoza and finding Torres. The Spaniard's first time pass ran into the path of a rampaging Ramires and his shot flew high beyond Wigan goalkeeper Ali Al-Habsi and into the net.

Maloney was the heartbeat of the Wigan side. His clever runs, tireless chasing and quick feet made him a constant thorn in Chelsea's side. Petr Cech denied him with a diving save early on, before his wicked cross was diverted behind by Cesar Azpilicueta with James McCarthy waiting to head in at the back post.

Franco Di Santo twice went close for Wigan but when Hazard thumped Azpilicueta's low cross beyond Al-Habsi to double Chelsea's lead 10 minutes into the second half, the game looked as good as over. History was stacked against Wigan, their only win at Stamford Bridge having come in the 1980 FA Cup.

Wigan clung to the hope that Chelsea might continue their recent habit of throwing away leads. Within a minute of falling 2-0 behind, Wigan hit back.

Hazard was caught in possession and Wigan broke with pace, Maloney beat the offside trap, rounded a charging Cech and steered the ball in from a narrow angle.

With the home support sensing another nervy afternoon, Wigan pushed again. The visitors appealed for a penalty when Ronnie Stam's shot thumped into Ashley Cole's arm in the penalty area only for referee Mike Dean to wave them away. With Wigan pushing for an equaliser, Chelsea then killed the game.

Hazard's cut back was dangerous and substitute Mata's clever dummy allowed the ball to run to Lampard 16 yards out. His unerring low shot flew into the corner of the net. With time ticking down and Wigan a beaten side, Marin was on hand to head in as Al-Habsi could only parry the impressive Azpilicueta's fizzing shot.

It was a bitter pill for Wigan to swallow but Chelsea march on.

Chelsea manager Rafael Benitez: "We said before, for us we have to win every game. It was a a good game, an open game and to score four goals is always positive.

"We had 27 attempts, which is quite good, and we had a lot of them inside the box. The team was attacking and creating and it was very positive. We deserved to win. Yes, we're making some mistakes, but we have a lot of positives. Today four goals could be six goals at the end."

Wigan boss Roberto Martinez: "I had to stretch the game, open up and leave ourselves exposed and on the counter-attack Chelsea took advantage of that. We were long enough in Chelsea's defensive third, and we had that presence there. I did feel that, if we'd got the equaliser, the ending would have been very interesting."

On the penalty claim: "Clearly the ball is travelling to the corner, to a place that will be very difficult for the goalkeeper. And it is blocked by Ashley Cole's hand. How much the defender knows about that, how much you can avoid having the arm in that position, I don't know. But that was a key moment in the game."