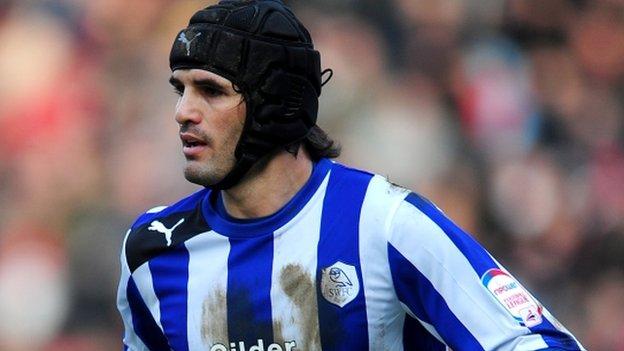 Sheffield Wednesday fought back from 2-0 down to draw against Derby, who slipped off the play-off pace.

Jeff Hendrick hit in a low shot to put Derby ahead and Jamie Ward doubled the lead from the spot after he was brought down by Miguel Llera after the break.

Leroy Lita tapped in a loose ball to put Wednesday back in it before Llera headed in Michail Antonio's cross to level.

Connor Wickham and Michael Prutton were denied a winner for Wednesday later on.

England Under-21 international Wickham saw his effort kept out by a good save from Adam Legzdins as the home side ended the match in the opposite manner to how they started it.

Derby looked lively from the whistle and Ward forced Chris Kirkland to palm away his early shot on goal.

The breakthrough came when Ward played a one-two with Hendrick, who drilled a low shot into the corner.

A speculative effort from top-scorer Antonio was all Sheffield Wednesday could muster in response in the first half.

But Ward's penalty fired up Wednesday and Lita, on-loan from Swansea, poked in from a corner before Llera levelled in front of the Kop.

Sheffield Wednesday manager Dave Jones: "You give yourself a mountain to climb when you give a penalty away and full credit to everybody in the dressing room because they worked hard and got back into it.

"Everybody showed great character, rolled up their sleeves and got going.

"Confidence was never really low. We lost games we shouldn't have lost.

"We're competing in a really hard division but it looks like we're back on track and anything is achievable."

Derby manager Nigel Clough: "We were pleased to get a point away from home and to score another two goals on the back of the three last week.

"I was happy with the performance and certainly with the way we played in the first half.

"I'm disappointed that the referee maybe missed a couple of fouls in the build-up to both their goals.

"The first goal was as good a team goal as you'll see today."