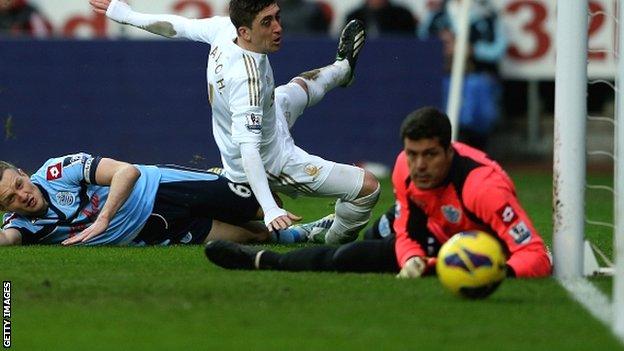 QPR remain four points adrift at the foot of the Premier League as their five-match unbeaten run came to an abrupt end at the Liberty Stadium.

They were 2-0 down inside 18 minutes, Michu following up Nathan Dyer's shot and Angel Rangel stroking home after Julio Cesar parried his first effort.

Rangers substitute Bobby Zamora replied from a keeper's fumble after the break.

But Pablo Hernandez weaved through to score from an acute angle and Michu hit Swansea's fourth with a deft finish.

Although they made some expensive additions during the transfer window, with one goal in four league matches Harry Redknapp's team could ill afford an early two-goal deficit.

Loic Remy was again absent through injury and Adel Taarabt was employed as a solitary striker but it was defensive frailties that caused immediate concerns for Rangers.

Swansea dispelled any suggestion they might be distracted by their League Cup final against Bradford on 24 February by being quicker to the loose ball and far more inventive with their passing.

An unmarked Wayne Routledge played a first-time lay-off to Nathan Dyer, given too much room in the centre of the field, and his shot from distance swerved in front of Cesar who could only push it out. Michu was the first to react, his right-footed volley from an awkward height looping into the net.

Routledge, impressing against his former club, threaded a delightful ball through for Rangel to cut in from the right flank, and after his drive was blocked, the Spaniard coolly converted the rebound with his left foot.

In the early stages the mercurial Taarabt produced an instant touch and flick so sublime it drew applause from both sets of fans but he could not significantly influence the match and demonstrated his frustration by blasting the ball away and tangling with several Swansea players.

Redknapp was also simmering on the touchline and made a double change at the break, which brought immediate success when Taarabt's run and shot from the right was palmed by Michel Vorm into the path of Zamora on the penalty spot and he tapped in clinically.

But two minutes later the visitors found themselves two behind again as Cesar, so impressive in keeping four clean sheets in his past five league games, was beaten by Pablo from close to the byeline following a jinking run and more delightful build-up play.

Rangers pressed again in an absorbingly open encounter and were denied a penalty when a cross from Andros Townsend appeared to strike the arm of Ashley Williams, Kyle Bartley clearing the resulting shot from Stephane Mbia off the line.

Michu, who also scored twice when Swansea beat Rangers 5-0 on the opening day of the season, was then able to hold off the powerful Christopher Samba following an exquisite through ball from Pablo to curl into the corner with his cultured left foot for his 15th league goal of the season.

The Spaniard, troubled in recent weeks by a tight hamstring, was taken off as a precautionary measure with the Wembley showpiece to look forward to, while for QPR, who hit the bar late on through a Shaun Wright-Phillips volley, the visit of Manchester United in a fortnight is rather less inviting.

Steve BowerBBC Match of the Day commentator at the Liberty Stadium

"This is a big setback for QPR, they capitulated, particularly in an extremely disappointing first 45 minutes.

"They have 12 games to survive in the Premier League and are going to have to play an awful lot better than this if that's to be the case."

"I was relieved when we scored the third goal but overall it was a great performance.

"We need it right now to get even closer to those 40 points that we want, we're very close now.

"It was really important for me because we know next Sunday Liverpool away at Anfield will be very difficult.

"We conceded sloppy goals, I love the way Swansea play but I didn't think they had to work that hard for their goals, they should have been dealt with.

"We looked better in the second half, we got back to 2-1 and I was thinking we'd get something from the game then suddenly we go and give two more goals away.

"If Bobby Zamora was fit for 90 minutes we'd be a different team but he's had a hip injury and he can't play for 90 minutes, he seizes up at half-time. He's what a Premier League player should be, he holds the ball up, brings people into play and he's a target. When he doesn't play we don't have that.

"He needs another operation but that would keep him out for 6-8 months and that's not an option."