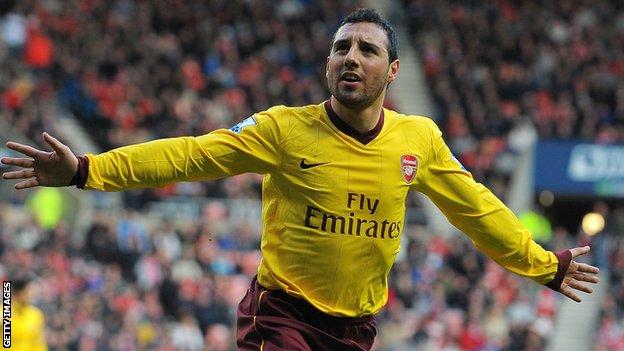 Santi Cazorla hit Arsenal's 50th league goal of the season to earn Arsene Wenger's 10 men a victory that lifted them to fifth spot in the table.

The Spanish forward fired through a sea of Sunderland legs after good work by Theo Walcott, before Carl Jenkinson was sent off for two bookable offences.

Arsenal were forced to endure some nervous moments, Steven Fletcher and Titus Bramble both wasting chances.

Walcott hit the post for Arsenal, who lost Jack Wilshere to injury.

Wenger will hope England international Wilshere, who limped off early in the second half, makes a speedy recovery. The Gunners struggled after the 21-year-old left the field before confirming a third win in four league games.

Wenger's side were forced to dig deep to secure the points with Wojciech Szczesny producing a flurry of late saves to keep out Fletcher, Stephane Sessegnon and Adam Johnson.

The tone for a hard-fought encounter was set inside the opening 10 minutes.

The Black Cats welcomed back captain Lee Cattermole from a knee injury for his first league start since November and the midfielder was cautioned inside two minutes for a late challenge on Aaron Ramsey, before Jenkinson saw yellow for a lunge on Jack Colback.

Jenkinson was only starting because French defender Laurent Koscielny tweaked his calf in the warm-up, Bacary Sagna moving to the centre of defence.

What a thriller. Arsenal appeared to be coasting until they lost Jack Wilshere to injury and then Carl Jenkinson to a red card. Martin O'Neill will spend the rest of the weekend, and beyond, wondering how on earth his Sunderland side did not find the net

Sagna endured a couple of nervous moments before the Gunners seized control through Cazorla's 35th-minute goal, a well executed finish from 15 yards through a sea of legs following a delightful move involving Walcott.

Wenger's side were playing with confidence and authority.

When the teams met in north London on the opening weekend of the season, the Gunners had 23 shots without scoring and they suffered further frustration as Simon Mignolet single-handedly kept the Black Cats in the game in the first half.

The Belgian goalkeeper had already produced a flying save to keep out Ramsey's curling 20-yard attempt before Cazorla's goal. Then Mignolet spread himself to prevent the Wales international from making it 2-0 at the end of the first half.

If the loss of Wilshere in the 50th minute was a setback for the visitors, then the red card flashed by referee Anthony Taylor in the direction of Jenkinson, who celebrated his 21st birthday on Friday, was a blow.

The former Charlton player could hardly complain, however, after a clumsy challenge on Sessegnon brought his second yellow card.

Suddenly it was all Sunderland. Fletcher blazed a chance wide after Sessegnon had dispossessed Ramsey and Szczesny then denied the former Wolves striker.

Bramble somehow failed to score from close range in front of a gaping net, while at the other end Walcott hit the post with a low finish following a wonderfully weighted pass by the impressive Cazorla.

There was still time for Adam Johnson to force another save from Szczesny but Sunderland, for all their determination and effort, could find no way through.

"It was a great game from start to finish. The tempo was very high early on and it remained so.

"Obviously Arsenal, a top-quality team, caused us a lot of problems in the first half but I also thought we looked dangerous as well.

"But in the second half, we just came roaring at them, and that was even before the man had been sent off.

"Seriously, looking back at a couple of the chances, I just don't know how we didn't score."

"It was tight in the end, but it was a game with a high level of intensity where we have shown some brilliance going forward, but unfortunately we couldn't score the second goal.

"Then we had to show another side in the second half, especially in the last 20 minutes, down to 10 men, we needed to be resilient, committed and deal with everything they offered us.

"But overall, I think it was a typical Premier League game with top quality on both sides."