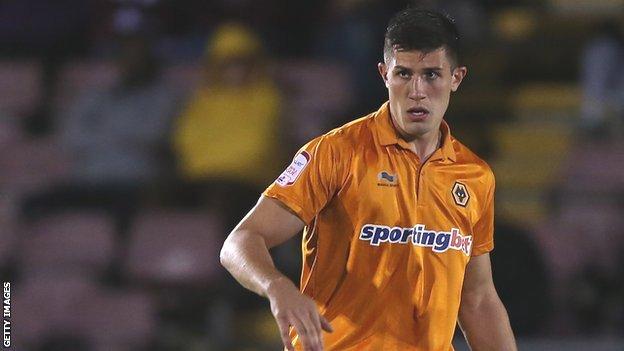 The defender's 92nd-minute header was a setback for Leeds boss Neil Warnock in his late bid for a play-off place.

An own goal by Lee Peltier had put Wolves in front, only for Leeds to go ahead thanks to goals by Luke Varney and a penalty from Ross McCormack.

But with time ticking down, Batth's late header stole a point for Wolves.

Wolves boss Dean Saunders remains without a win after five games in charge but for much of the second half it appeared the Molineux club were headed for defeat.

It was a typically breathless encounter, but it wasn't until the second half that it sparked into life with a goal from the hosts that owed more to good fortune than design.

It was harsh on Leeds, having largely dominated proceedings, but their captain Peltier turned the ball into his own net to put Wolves in control.

Leeds responded well, levelling thanks to Varney's sweet left-footed strike and snatching the lead when Bakary Sako was adjudged to have hauled down Sam Byram, leaving McCormack to blast home the penalty with 12 minutes remaining.

That looked to be the winner until Batth had the final say deep into injury time.

Wolves manager Dean Saunders: "If you can't defend goal-kicks, long throws and free-kicks then you will concede goals and I have got to do something about it.

"Three managers have got the sack because the team have been conceding goals and I won't be the fourth.

"I have been trying for three weeks to get things done but have not been able to get anyone in that we can afford. It is a necessity now.

"Obviously we haven't won for a long time but it is coming because that is the best we have played."

Leeds manager Neil Warnock: "The frustration for me is that we have just played Cardiff City and Wolves and we should have had six points and I have got one out of both games.

"I want to go up. I think I am more frustrated than anybody.

"It is all right for the players; they are all young and they can play for years to come."