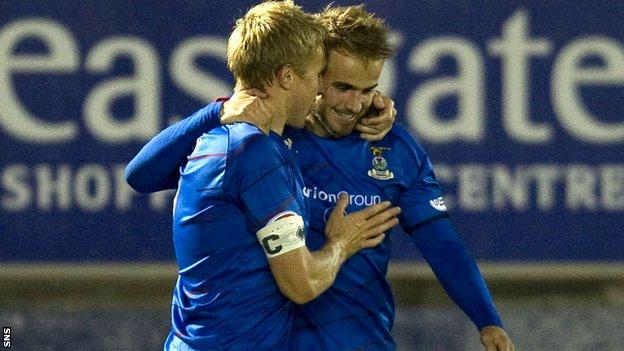 Manager Terry Butcher is worried influential Inverness duo Andrew Shinnie and Richie Foran could both be out for a "few weeks".

The pair were injured in the first half hour of Saturday's 2-0 Scottish Cup defeat at Kilmarnock.

"It must have been bad for Richie to come off," said Butcher. "Someone landed on his knee.

"I don't think Andy's is that serious. His hamstring is tight but it has not snapped or torn."

As well as suffering their third defeat and second cup exit in eight days and losing Foran and Shinnie to injury, Butcher revealed that Billy McKay (ankle) and Owain Tudur Jones (knee) had also suffered knocks.

And Butcher, who was without the suspended Ross Draper, bemoaned his side's luck in conceding the opening goal.

Substitute Charlie Taylor stopped William Gros with an excellent covering tackle but saw the ball bounce off team-mate Gary Warren and into the path of Paul Heffernan, who drilled a shot into the back of the net.

"We never get a chance like that, we have to create our chances," said Butcher.

"I just couldn't believe how it happened but it did and he has buried it and after that it's us trying to press the game and we got caught again."

Heffernan added a second goal with a back-heel late in the game.

"Your captain and most influential player gets taken off in the first half and it was always going to be difficult from there on," Butcher continued.

"I look at their bench and see (Manuel) Pascali, Heffernan and (Garry) Hay and people like that and our bench is made up of young kids.

"Our young kids came on and did well and got into the game but it was going to be hard.