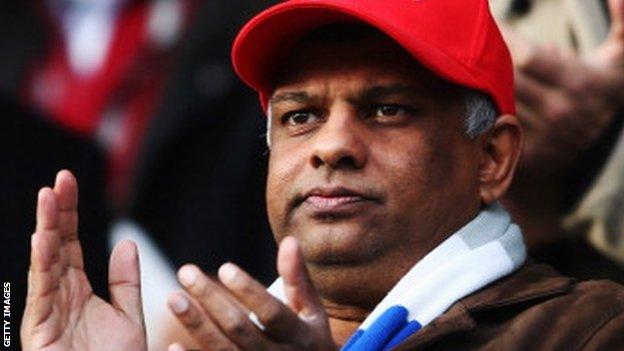 Tony Fernandes says he will continue to back QPR financially if he steps down as chairman and is still confident the club can beat the drop.

"If it goes wrong and people think I'm the wrong chairman, I'll step down, but my investment will stay," he said.

Fernandes also defended the signing of Chris Samba and rejected reports about the defender's weekly wages.

QPR, managed by Harry Redknapp, are bottom of the Premier League table, six points adrift of safety after collecting just 17 points from 25 games.

But they spent heavily in the January transfer window, signing Samba from Russian side Anzhi Makhachkala for £12.5m, as well as striker Loic Remy, midfielder Jermaine Jenas and defender Yun Suk-Young.

"We're in a fight, but we think we can get out of this mess," added Fernandes. "We're in no man's land at the moment.

"We're a small club with a small stadium, but you have to make investments to go forward.

"Samba was a player we wanted for three transfer windows, but we could never make it work."

Fernandes clarified recent tweets suggesting he would step down as chairman if he thought it was best for the London club.

"I think people misunderstand what I said," he said. "[If I] walk away as chairman, I'll continue to be a board member and support the club because I have a long-term vision for the club.

"The club has been hopelessly underinvested for a vast number of years and we're putting that investment right.

"I knew that we'd have quite a few years struggling. I've always known we'd have a fight. If we go down, we'll prepare for it."

On Peter Odemwingie, who was heavily criticised by his club, West Brom, for seemingly trying to orchestrate a move to QPR, Fernandes added: "Nothing we did was wrong.

"We never spoke to the player, we never got permission to speak to the player and I think it's a most unfortunate incident.

"No-one came out well, but we've acted in the most professional way."