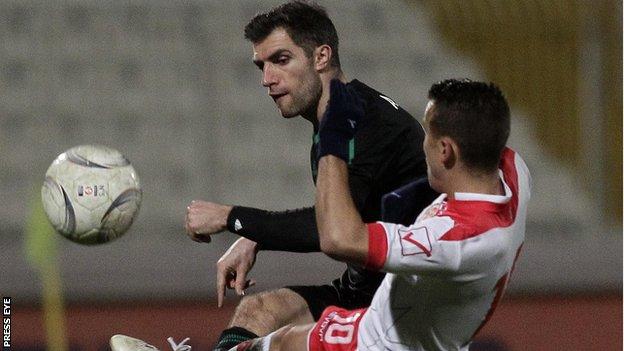 Michael O'Neill is still waiting for his first win as manager after Northern Ireland made it four draws in a row in a disappointing game in Malta.

In a warm-up for World Cup qualifiers against Russia and Israel, Northern Ireland rarely looked like winning their first away friendly since 2006.

Daniel Lafferty did have the ball in the net but his header from a Chris Brunt corner was ruled out.

Alan Mannus made a good save from Michael Mifsud in the second half.

St Johnstone keeper Mannus produced a solid performance in his first full international game and it was a first clean sheet in 11 matches for Northern Ireland.

It is now eight games without a win for O'Neill since taking over from Nigel Worthington just over a year ago.

The manager seemed to set up the team to play the way they will try to do against the Russians in Belfast next month.

Chris Baird and Kyle Lafferty are both suspended for that game and did not travel to Malta, so there was a Northern Ireland debut for Alex Bruce in the holding midfield role while Walsall's Will Grigg won his second cap up front.

Bruce, who plays under his father Steve at Hull, previously played for the Republic of Ireland but was able to switch allegiance as he did not make a competitive appearance.

Northern Ireland's best moment was in the 18th minute when defender headed in from West Brom team-mate Brunt's corner but referee Nikolay Yordanov disallowed it out for pushing.

Malta were the more threatening side for much of the first half and came close twice through Andre Schembri, who first shot straight at Mannus and then fired just off target.

In the 56th minute Mannus was called into serious action for the first time when former Coventry striker Mifsud unleashed a stinging shot from the right, the keeper palming it away.

In the 63rd minute Inverness striker McKay was introduced, winning his first cap when he replaced Ferguson on the right, with Grigg remaining the lone striker.

The visitors were pressing but in the 70th minute they were indebted to Mannus for an excellent stop to keep out Mifsud once again at close-range.

Pat McCourt and Josh Magennis were introduced late on but there was no way through the Malta defence and the visitors had to settle for a disappointing draw.