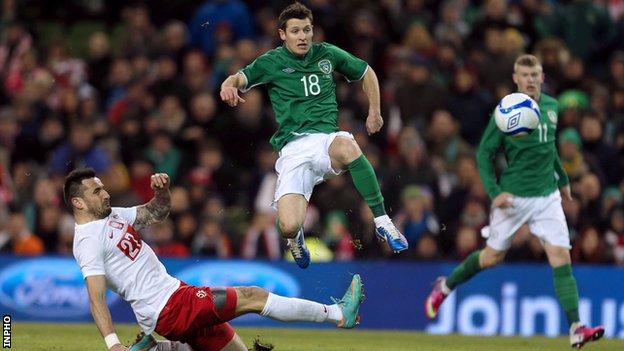 Ciaran Clark and Wes Hoolahan scored their first international goals as the Republic of Ireland recovered from a slow start to beat Poland in Dublin.

David Forde denied Robert Lewandowski twice as the home side looked shapeless early on in the friendly clash.

But against the run of play, Clark produced a cool left-foot finish to put the Irish ahead on 35 minutes.

Hoolahan hit the Republic's second goal on 76 minutes with a glorious finish after a superb Jeff Hendrick pass.

The clinching goal - with the two second-half substitutes combining superbly - was by far the best moment of quality in a largely forgettable contest.

Derby midfielder Hendrick was only five minutes into his Irish debut as he set up Hoolahan's goal after being introduced for James McCarthy.

Rare Trapattoni experimentation also saw him picking James McClean and Hull City's Robbie Brady on the midfield flanks ahead of next month's vital World Cup qualifiers against Sweden and Austria.

But there was little to enthuse about the Republic's display in the early stages as the Poles dominated against the ragged home outfit.

Judging by the noise, the visitors appeared to have the greater support in the 40,000 attendance - no great surprise considering the large Polish community in Ireland and the apathy which has enveloped sections of the Irish support about Trapattoni's tactics.

Sebastian Boenisch was an attacking threat in the opening stages with Forde having to kick away a dangerous cross in the fourth minute after some neat Polish passing.

Forde had a lucky escape in the 19th minute as his attempted clearance went straight to Ludovic Obraniak on the edge of the box only for Paul McShane to deflect the Pole's shot just wide.

To his credit, the Millwall keeper did redeem himself 10 minutes later as he dived full length to deny Borussia Dortmund striker Lewandowski after McShane had lost possession on the halfway line.

By that stage of the contest, there was no discernible pattern or method in the Irish play with misplaced passes and aimless long balls infecting their display.

But against the run of the play, the Republic took the lead on 35 minutes as Clark coolly picked his spot to stroke home from 10 yards after Artur Boruc had beaten away Shane Long's close-range effort.

As the pace picked up, Forde had to produce a full-stretch save to push a bouncing Lewandowski shot out for a corner and the Dortmund striker had a strong penalty claim turned down in the 38th minute after appearing to be clipped by Clark.

Sammon should have doubled the Republic's lead on 61 minutes after a terrible attempted clearance from Damien Perquis on the edge of the six-yard cross but the Derby striker's heavy first touch allowed Szczesny to gather.

As the Polish began to lose their way, Hoolahan and Hendrick were both introduced after the hour and the duo combined brilliantly for the Republic's second goal on 76 minutes.

After a McClean free-kick had been cleared to just outside the box, Derby midfielder Hendrick picked out a charging Hoolahan with a delightful lofted ball over the defence and the Norwich player poked a clever finish past Szczesny.

By some distance, the move was the best piece of quality produced by the Irish on the night as Hoolahan, in particular, pressed his claims for a starting role in next month's qualifiers.