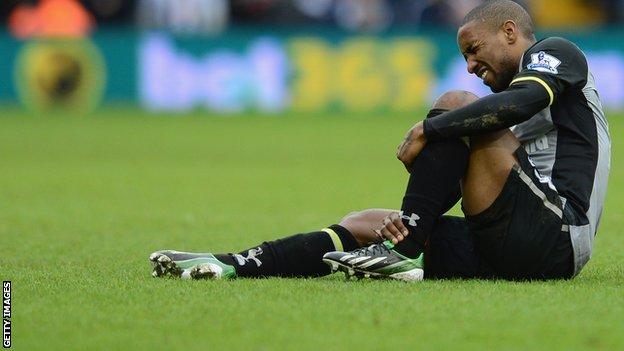 Tottenham manager Andre Villas-Boas expects to be without Jermain Defoe for around three weeks and admits it was a risk not to sign a striker in January.

Defoe, who will miss England's friendly against Brazil on Wednesday, damaged ankle ligaments during the first half of the 1-0 away win over West Brom.

Villas-Boas also has Emmanuel Adebayor away on Africa Cup of Nations duty.

"We'll have to scan it to see if there is more damage, but hopefully it will only be two to three weeks," he said.

"He has some ligament damage to his ankle. We will have to see the full extent of the injury. But we will miss him badly."

Villas-Boas adapted his tactics following Defoe's injury in 39th minute of the victory at The Hawthorns but was pleased with the way his side coped without a recognised out-and-out forward - albeit against 10 men.

Villas-Boas had tried to sign Nacional striker Leandro Damaio late on deadline day but no deal could be struck and he said it was a "gamble" not to bring in another forward.

"We didn't stop attacking when we made the change. I can understand you don't see a striker but I think we have goals throughout the squad," he added.

"It is difficult without Defoe but we have to adapt and hope for his comeback as soon as possible."