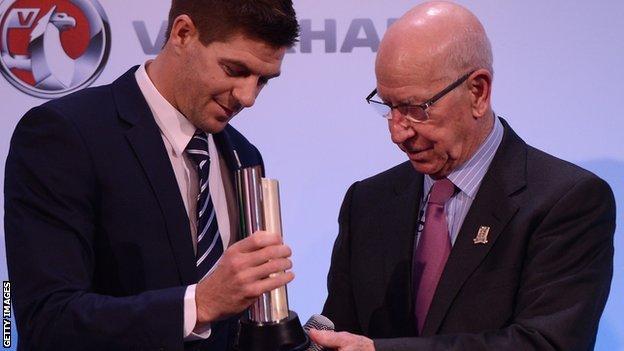 Steven Gerrard has been named England player of the year for the second time.

The 32-year-old England and Liverpool captain, was presented with the award - voted for by supporters on the Football Association's official website - by Sir Bobby Charlton at a ceremony in Burton.

Arsenal's Stephanie Houghton won the women's award, while the women's senior team were the England team of the year.

Gerrard said: "It means a lot to me when you look at the quality and standard of players in this squad. For me to be picked out to win an individual award is a bonus and something I'm really delighted with.

"It's always a proud feeling to play for this team and the manager believing in me and giving me the captaincy was a huge lift for my personal confidence.

"I think I've shown a level of consistency that maybe I haven't shown in previous years, so it's been a good year."

Chelsea midfielder Frank Lampard and Manchester United striker Wayne Rooney are the other two players who have won the England player of the year award twice.

Reds midfielder Gerrard, who also won the award in 2007, impressed for England at Euro 2012 after he was given the captaincy by manager Roy Hodgson for the finals in Ukraine and Poland.

Houghton was part of the Team GB women's football side that reach the quarter-finals at London 2012.