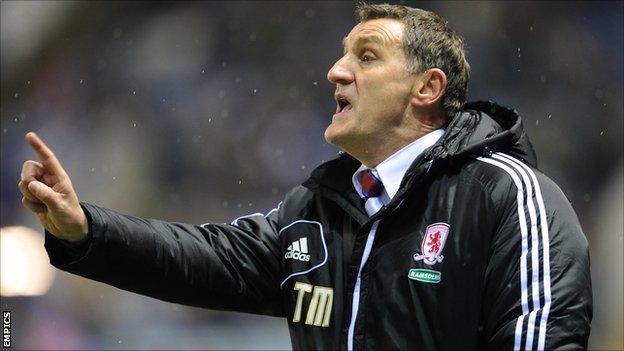 Middlesbrough manager Tony Mowbray has said team spirit and togetherness will be key to steering their promotion bid back on track at the Riverside.

Four straight defeats in the Championship, including have seen Boro slip to sixth in the league table.

"We have to dig deep, we have to stick together," Mowbray told BBC Tees.

"The only way to turn it round, with the opportunity of two home games, is through hard work."

Barnsley and Leeds provide the opposition for Boro in their next league fixtures.

Meanwhile Mowbray has explained the withdrawal of defender Jonathan Woodgate in Saturday's loss with 25 minutes remaining.

The former England centre-half, 33, was making his first appearance for the Teessiders since the New Year's Day defeat by Derby County at Pride Park.

"That was me making that decision the game was done and sometimes Woody, history suggests in the last 10 minutes of games he can pull a calf or a hamstring," Mowbray added.

"I was trying to make sure he would be available for the next few games, he'll have a full week's training and hopefully be ready for Barnsley on Saturday."