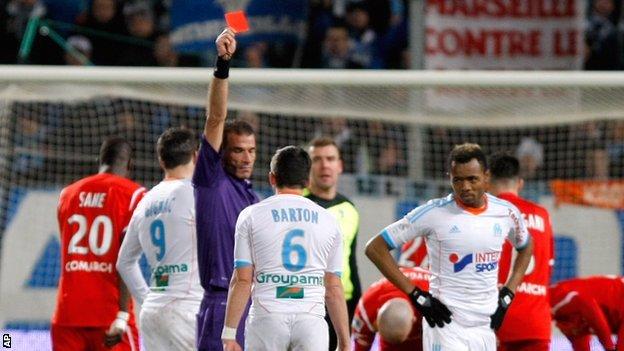 Midfielder Joey Barton was sent off for the first time in his Marseille career during a 1-0 defeat by Nancy on Sunday.

The 30-year-old Englishman, on loan at the top-flight French club from QPR, picked up two yellow cards in five second-half minutes with the game 0-0.

"I am disappointed," said Barton, who has been sent off seven times in total. "I am partly responsible for this loss.

"I apologise to my team-mates. The referee made his decisions, but I don't think my tackles were too dangerous."

Nancy's win lifted them off the bottom of Ligue 1 as they dealt a blow to Marseille's title ambitions.

Marseille coach Elie Baup believes the seventh sending off of Barton's career was a turning point in the game, although he did not feel it was a deserved red card.

"The game turned with the expulsion of Barton," said Baup.

"We had not been brilliant in the game, but there was no real danger [before the red card]. Being down to 10 men made things more difficult."

He added: "His first card was unjustified since there was no foul, and on the second he was committed to trying to get the ball.

"We waited a long time and wondered when Barton would be sent off for the first time, and that was done tonight [Sunday]. But he did not deserve to be sent off."