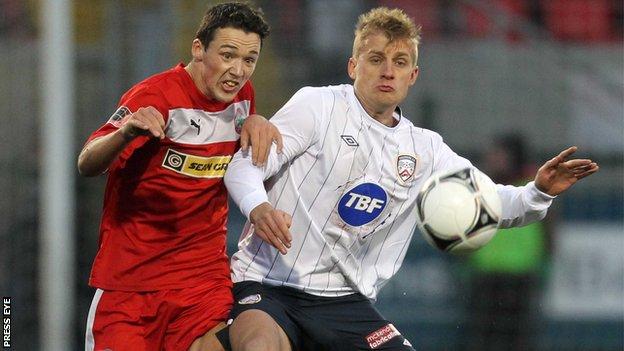 Cliftonville manager Tommy Breslin believes Tuesday night's clash with Coleraine at Solitude will be key in the Premiership title race.

The pacesetting Reds hold a nine-point lead over challengers Crusaders.

"It will be a massive result for us if we come away with the three points and that's our aim," said Breslin.

Ballymena United face Donegal Celtic at the Showgrounds but Glentoran's game with Dungannon and the Lisburn Distillery-Crusaders clash are off.

Cliftonville again impressed in Saturday's 4-0 victory over the lowly Whites while Coleraine were held to a scoreless draw by Ballinamallard.

Grant Cameron and Lindsay McKeown are on commentary at Solitude as leaders Cliftonville take on Coleraine.

There will be regular updates from Ballymena United's clash with Donegal Celtic.

Breslin added: "This is a massive game - Coleraine have been a bit up and down but I think they are very good individually and collectively.

"A win would continue our momentum and every time a question has been asked of this team, they have answered it emphatically."

Ballymena United fought back from two down to champions Linfield to earn a memorable weekend draw at Windsor Park.

Sky Blues boss Glenn Ferguson wants the same determined attitude from his players against a struggling Donegal Celtic side at the Showgrounds.

"We're at home, we've got a good squad and players are coming back from injury, so we've no excuses," said Ferguson.

"The boys just have to put in a shift like they did against Linfield and be in the right frame of mind for it.

"It will be very difficult and we'll be up against it - Pat McAllister has them fighting for every point."

United striker David Cushley is banned but Shane Dolan is set to return from injury and Shaun Maher could make his first start for the club.