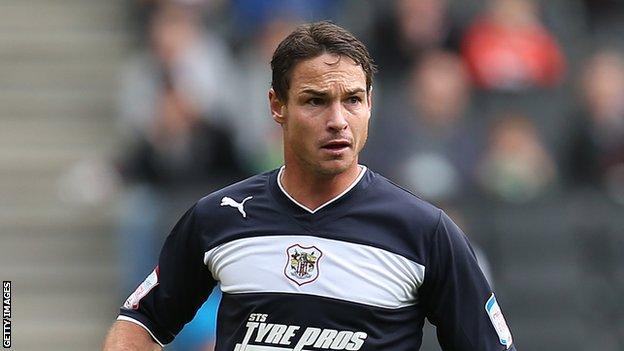 Midfielder Oliver Risser believes Aldershot Town's prospects of climbing out of relegation trouble are good after the draw at Exeter on Saturday.

Risser, making his full debut, told BBC Surrey the Shots were disappointed not to leave Devon with all three points.

"A lot of mechanisms still have to grip, but the signs were very promising," said the 34-year-old. "It's a good step forward.

"We thought before a point would be good, but we could have nicked it."

Namibia international Risser joined the Shots on a six-month deal from Swindon Town last month - one of a series of signings made by manager Dean Holdsworth during the transfer window.

After four appearances as a late substitute before making his first start in the game at St James' Park, he is now hoping to retain his place for the home game against Plymouth next Saturday.

"The gaffer thought [being substitute] maybe was the right way to put me in, but I thought it was quite a decent performance from the whole team at Exeter, and we'll take it from there," he continued.

"In the second half we slowly came into our game. Asa Hall only joined last week [on loan from Shrewsbury], myself it was my full debut, so a lot of mechanisms still have to grip.

"The mood in this camp is quite good, they're all honest, decent lads and that's a good foundation.

"Every single game is a battle. Saturday against Plymouth you can say that's a six-pointer from the league table, but you can put too much pressure on yourselves that way.

"There are 18 games left and we want to pick up as many points as possible."