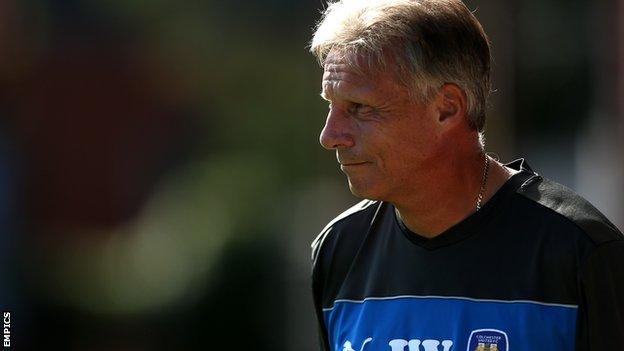 John Ward has spoken of his joy at returning to management at League Two Bristol Rovers.

Ward returned for a second spell at Rovers following Mark McGhee's sacking in December, and three consecutive wins have lifted them out of the drop zone.

Prior to his comeback, the 61-year-old had spent three months out of the game after being sacked by Colchester.

Speaking after the 2-1 win over Barnet on Friday, he told BBC Radio Bristol: "I haven't felt like that for ages."

Ward continued: "When I left my last club I was packing all this in - I wasn't going to do it again.

"But as a manager in a key game, in front of a big crowd, it's such a fantastic feeling to find a winner.

"We should enjoy it because that's what we're working for."

Friday's victory - played in front of 8,500 fans and their biggest crowd since May 2010 - lifted Rovers up to 19th in the table and two points away from danger.

But their next challenge is to overcome automatic promotion chasers, and Ward's former club, Cheltenham on Tuesday.

Ward was in charge at Whaddon Road from 2003-2007 and lifted the Robins from the bottom of League Two to promotion in three seasons.

And he is relishing his return to where he had one of his most successful periods.

"It's similar [to Rovers] in a sense because when I went there it was November and we were second-bottom of this league," he said.

"We had to get out of a mess and we did - we finished 14th. We finished 14th the next year and the following year we got in to the play-offs and managed to get promotion.

"It was rags to riches in a sense. We were really struggling but we managed to redevelop. It holds a lot of good memories for me."

Current Cheltenham manager Mark Yates played under Ward at the Robins, and is looking forward to coming up against his former boss.

"He got rid of me - not that I hold any grudges," Yates quipped. "I speak to John a lot. He's a very good manager.

"He's done wonders at this club in the past and his side now are very much on the up.

"His supporters will be making noise and they're going to try and intimidate us. We need to respond to that."