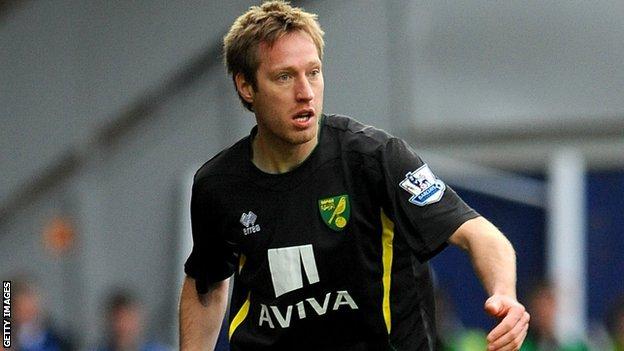 Norwich City striker Grant Holt says he will have no complaints if new signing Luciano Becchio's arrival reduces his time on the pitch.

They finished on the pitch together as Becchio came off the bench for his debut.

"I'm sure the manager can play us together if need be, but if not, we might even have to rotate," Holt told BBC Radio Norfolk.

"But you get on with it. That's football," the 31-year-old continued.

"We know what Becchio can do. He's aggressive, he's good in the air.

"You look at it as the greater good of the club and trying to stay in this division. It's competition and that's what we'll thrive on."

Argentine Becchio, 29, arrived as a transfer deadline day ending a five-year career at Elland Road which included 221 appearances and 86 goals.

The Canaries also made numerous unsuccessful bids for Celtic striker Gary Hooper but Holt, who has been Norwich's top scorer for the past three seasons, insisted he would have welcomed further additions.

"It doesn't bother me who the manager brings in, he can bring in whoever he wants as long as we stay up," he added.

"If he had brought in Gary Hooper then great. He is an acquisition that would have been good for the club.

"People come and go at this club, but for some reason I'm still here, so I must be doing something right."