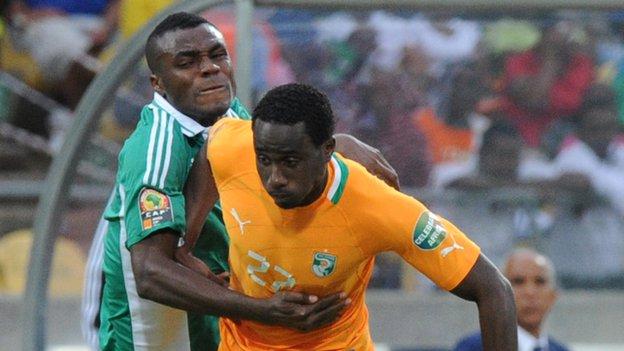 Ivory Coast defender Sol Bamba says the team are behind coach Sabri Lamouchi despite their quarter-final exit from the Africa Cup of Nations.

Lamouchi's side were pre-tournament favourites to win the title but were beaten 2-1 by Nigeria on Sunday.

"The players want [Lamouchi] to stay but in Africa when you lose a game, they're used to sacking the manager," Bamba told BBC Sport.

"Hopefully it's not the case but we'll have to wait and see."

Lamouchi took charge of the Elephants in May after Francois Zahoui was sacked, despite the fact the 41-year-old former France international had no previous coaching experience.

As well as speculation over Lamouchi's position, it is widely thought that a number of players from the so-called 'golden generation' of Ivorian football, such as Didier Drogba and Didier Zokora are now coming to the end of their international careers.

But Bamba hopes the current squad can stay together and play in the 2014 World Cup in Brazil.

"Football's about ups and downs and when you're down you learn and you have to stand up," he said.

"We're very disappointed but it doesn't have to be the end.

"We've got the qualifiers for the World Cup to play, so we're looking forward to it."